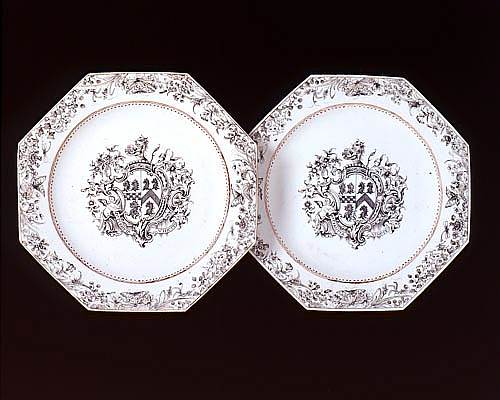 REF No. 5623/5624
Pair of Chinese armorial plates with the arms of Birkbeck

A pair of octagonal grisaille and gold armorial plates with the arms of Birkbeck impaling Upwood and the motto PATIENTIA VINCIT, the rim finely painted with a border of flowers and insects.

The arms appear to be of Birkbeck impaling Upwood, though neither family has this unrecorded crest nor this motto.

The numerous family of Birkbeck are originally from Westmorland, where Thomas Birkbeck was granted these arms in 1515. A branch of the family is recorded in the eighteenth century living in Settle, Yorkshire, as bankers and merchants, William Birkbeck married Sarah Armitstead in 1703 and had at least two sons, John (1722-1761) who married Sarah Wilson, having eight children and William (1705-1772), who married first Sarah Morris in 1730, having a son Morris (1734-1816) and secondly Deborah Wilson (sister of his brother's wife), having  seven sons and a daughter among them, William (1745-1805)) and John (b.1747), the latter marrying Mary Gurney of Norfolk where he settled. William married Sarah Braithwaite (1750-1790) and had a son George Birkbeck who founded the London Mechanics Institute in 1824 which became Birkbeck College.

The family of Upwood is from Lovells Hall, Terrington St Clements, Norfolk and has a detailed pedigree but there is no record of any marriage between Birkbeck and Upwood. The correct arms for Upwood should have a chevron gules (red or vertical lines in engraved arms) rather than sable black or crosshatched in engraved arms).

One possibility is that the second coat is erroneously portrayed. Many of these armorials on porcelain were copied from book plates and this example is obviously so; among the rising merchant classes of the eighteenth century many of the strict rules of heraldry were only loosely regarded. A marriage is recorded in St George's Mayfair, London, 11 May 1753 between John Birkbeck and Mary Thornton, of a Hull banking family related to William Wilberforce. The arms of Thornton are Argent a chevron sable between three hawthorn trees proper, which is very similar to the sinister coat here (Argent a chevron between three horses head erased sable). This John Birkbeck seems to be the son of John Birkbeck and Hannah Garth who married in Grinton, Yorkshire, in 1723, though their son was christened in St Dunstan In The East, London, 1728. It is possible that someone confused the thorn bushes with the horses' heads - though Howard discounts this as the overall design is clearly taken from a book plate and it is unlikely that an erroneous bookplate would have been used for such an expensive order.

The exact source of this service remains a mystery but it is just possible that a book plate and this service were all arranged and ordered for a forthcoming marriage between a Birkbeck and an Upwood that did not then take place.