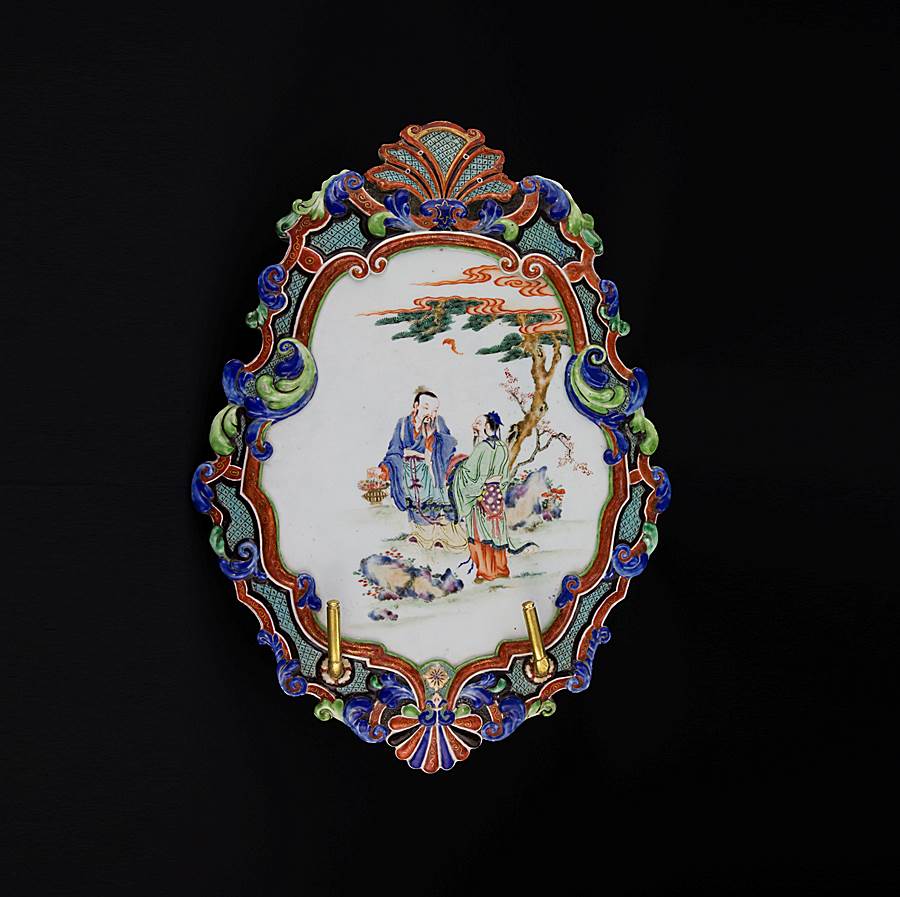 A rare and large wall bracket with a central panel of two Chinese sages and an elaborately moulded border after Delft examples, with two later brass candle sconces.


This interesting item perfectly illustrates the collision of artistic endeavour between the West and East that is a feature of the China trade at this time. The form is copied from Delftware and yet the central image is a classic piece of Chinese imagery.

This wall sconce is almost certainly from the special workshops in Canton set up to make the luxury porcelains using the designs of the Dutch painter Cornelis Pronk. In the records of the VOC there is mention of ‘tapestry sconces’ copied after delft originals and the wooden moulds for them which were taken to China, two styles in three sizes, six moulds in all.

There are few surviving examples of these sconces and none with the known Pronk designs found on dinner services and other items. However three types are known: one with a torch bearer, one with a lady on a swing and the design of a phoenix.

This piece now adds another element to the story of the Pronk workshops. Possibly this was a trial piece made from the moulds taken from the Delft sconces and enamelled by the Chinese to show the Dutch traders before the Pronk designs were used. Or it is a blank porcelain example left over after orders of the Pronk designs were completed - and finished in Chinese style. The enamelling is very good - and the image on its own would probably be dated to the Yongzheng period, so the former is the most likely explanation.

The brass mounts in the porcelain are contemporary and were most likely added when the sconce first arrived in Holland but the detachable sconces are later, probably nineteenth century.