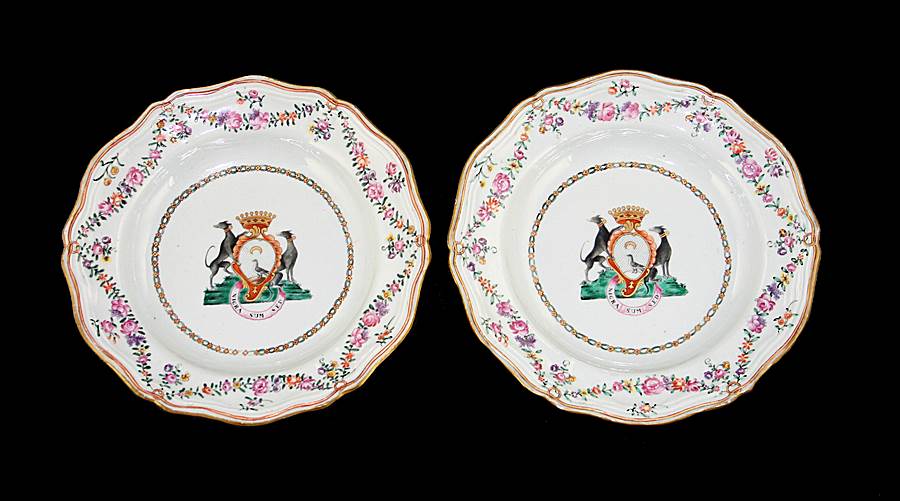 Pair of famille rose soup plates enamelled with a French or Spanish coat of arms (previously thought to be Ganon of France but now attributed to Aguado de Las Marismas) within a floral swag border.
Motto: Nigra sum sed

The service has been published in Antoine Lebel’s book Chinese Armorials for the French Market (2009); p237, where he tentatively attributes the arms to Aguado de las Marismas. They were a Spanish family with interests in France, and a part of their arms is similar; they became naturalised French circa 1830.

The Arms:
de las Marismas (= “of the marshes”) Lebel relates that something similar to this was part of the arms granted to the 1st marquis Aguado de las Marismas in 1829, though the crescent may have been misinterpreted.

First used describing the Queen of Sheba in 1:5 of the Book of Songs. Originally it was considered as a compliment and the original hebrew was: I am black and beautiful. The translation to Latin became ‘I am black but beautiful’ and from the Renaissance onwards in Europe it became a rather unfortunate qualifier, with greater emphasis on the ‘sed’ (but).
Used here it suggests that the family might have connections with Moorish Spain but no conclusive evidence has emerged. The service might just possibly have been made for an ancestor of  Alejandro’s wife’s family but then why would he include that in his complex coat of arms when he was made a marquis?
The ‘black but…’ formulation was widespread in fifteenth and sixteenth century Spain and Portugal and unfortunately this means it cannot be tied to one family.

The Aguado de las Marismas are from Andalucia. The most notable was Alejandro Aguado y Ramírez de Estenoz, (born 1784 in Seville - died Dijon 1842) a banker and soldier who was made 1st Marquess de las Marismas de Guadalquivir in 1829. He became French in 1828 and became Mayor of Ivry-sur-Seine. His wife was described as creole (possibly she was descended from European emigrants to the West Indies, where Alejandro had significant interests in Havana and Mexico?). He was a man of great significance in early 19th century France, very wealthy with several sons, one of whom was an early photographer. One of his grand-daughters married the Duc de Montmorency.