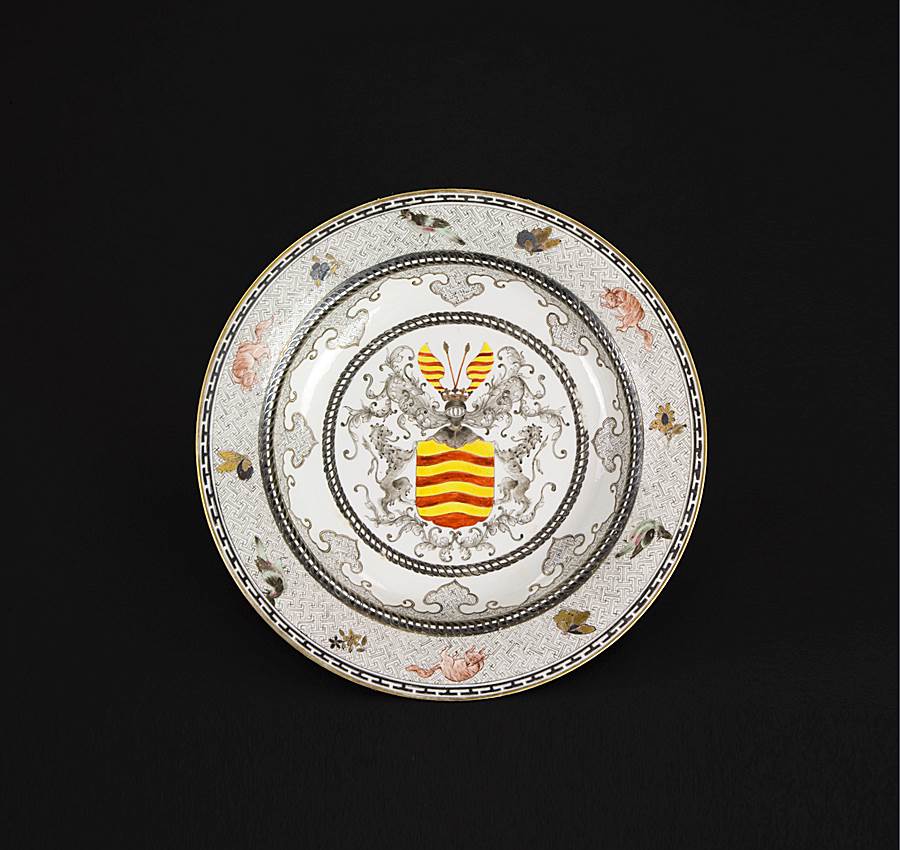 A rare eggshell porcelain soup plate with an elaborate central armorial within a double silver rope border, the rim decorated with tree shrews, birds, butterflies and flowers against a grisaille keyfret ground.

The arms are of van Hardenbroek of Utrecht, most probably for Baron Jan Louis van Hardenbroek (1691-1747) son of Gijsbert Jan Van Hardenbroek (d 1698) and Anna Maria van Marlot (d 1695). Orphaned by the age of eight he eventually entered the Dutch navy becoming a captain and later Admiral. A 50 gun Dutch ship of the line was named Hardenbroek about 1704, but this was captured by the French, renamed Esperans and sold to Russia. He left the navy in 1734 having recently inherited the title heer van Vliet (a manor in Lopikerwaard) and so had been admitted to the Riddershap van Utrecht (Utrecht Nobility). Either of these events would have presented the occasion for ordering such a fine service of soup-plates.
Jan Louis married Johanna Charlotte van Renesse in 1718, who bore him at least two sons before she died in 1723. The older son Gijsbert was a noted diarist and is mentioned by James Boswell. The younger son Jan Adolf (1721-1791) married Susanna d’Aumale, daughter of the Duke of Aumale, herself a friend of Boswell and a noted society figure.
Jan Adolf himself ordered a large dinner service with the same arms, in 1763 (Kroes, 2007, Cat 379). Most of that service (approx 240 pieces with different decoration) remains at Hardenbroek Castle. However this plate comes from a small set of no more than 24, listed in an inventory at Hardenbroek in 1788 as: “zwart en wit desert schoteljens met het wappen” (black and white dessert saucers with the coat of arms).
Jan Louis secondly married Adriana Alida Pompe van Meerdervoort (1705-1763) in 1726.
It is possible that the order was taken by a cousin Lukas Hardenbroek who was Master of the VOC ship Beekvliet, sailing to Batavia in 1732 and returning in 1733 on the Schonauwen.
The van Hardenbroeks of Utrecht date back to the first half of the fourteenth century from a cadet branch of the van Stekelenburg family. The Castle remained in the family by descent until the late 17th century when it was sold, though it was bought back by a direct descendant, Baron Jan Adolph van Hardenbroek (1721-1791) in the mid 18th century.
Many Hardenbroeks settled in America in the mid 17th century in New Amsterdam (later New York) where they were significant members of the early Dutch community and members of the Dutch Reform Church.
Documents indicate that they originated from Elberfeld in Germany, now part of Wuppertal, close to The Netherlands. However it has not yet been possible to connect them directly to the Hardenbroek family of Utrecht, though other Dutch families were recorded in Elberfeld at that time.
Among this family is Margaret Hardenbroek, who arrived in New York from Holland in 1659, married into the Philipse family and became a successful ship owner and trader in the West Indies, carrying everything from sugar to slaves. By the end of the 17th Century she had invested her wealth in property, owning a substantial amount of Manhattan and almost the entire county of Westchester.
Margaret’s brother Johannes had a daughter Catharina Hardenbroek, who married James Roosevelt in 1713 in New York and bore him twelve children. Their son Isaac was active in the American Revolution and President of the Bank of New York and their descendants include Theodore Roosevelt and Franklin Delano Roosevelt, US Presidents.
This very fine plate dates from the second half of the reign of Yongzheng and is very unusual in being on delicate eggshell porcelain and of such fine quality painting. One other set of eggshell soup-plates bears the arms of Titsingh (Kroes, 2007, Cat 89). The design too is striking with such a concentration of colour in the arms contrasted with the grisaille. According to Dr Jochem Kroes, only five examples from this set are now known, and they have been recorded in the collections of Florence Gould, Baronne Pangaert d’Opdorp and François and Nicole Hervouët.
References: Kroes, Jochem 2007, Cat 171, this service; Cat 379, the later service; Zimmerman, Jean (2006) The Women of the House, a biography of Margaret Hardenbroek; Epperson, Gwen (1994) New Netherland Roots, contains much about the origins of the US Hardenbroeks.