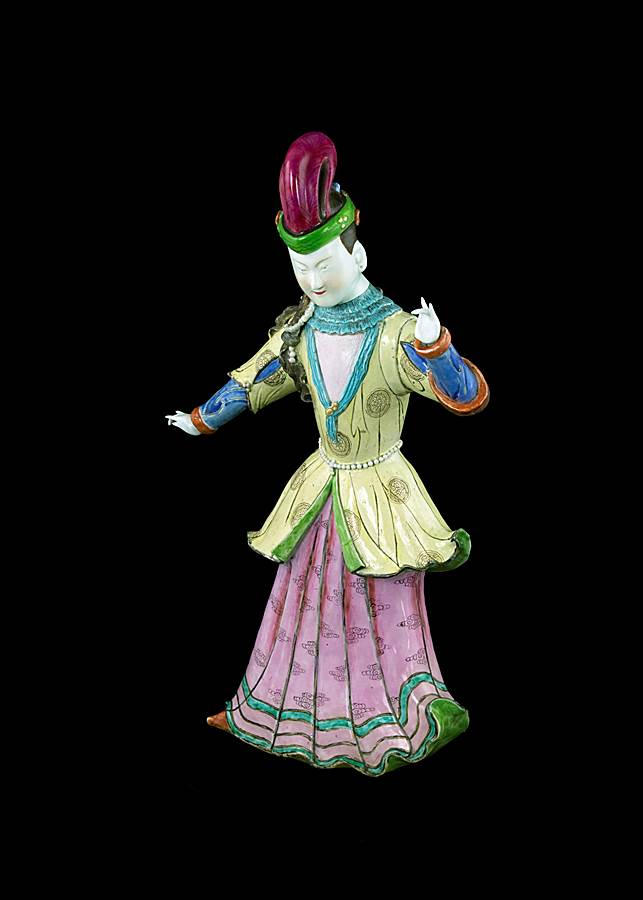 REF No.
famille rose figure of a Turkish dancer

An extremely rare famille rose figure of a Turkish dancer, with purple hat with green rim, a yellow coat and pink skirt.


This large figure is one of the rarest figures of non-Chinese people to be found in Chinese export porcelain. Only four other examples are recorded, all in museums, and it comes from a workshop that produced another pair of large figures, the man and woman wearing German (Frankfurt) Jewish clothing, that have similar enamelling and are also derived from early 18th century prints.
The turquerie style was fashionably exotic throughout the 18th century in Western Europe. People were fascinated by the art, literature and costume of the Ottoman Empire and it was popular to have portraits painted in Turkish dress. The fashion received a boost in 1762 with the publication of the best selling letters of Lady Mary Wortley Montagu, concerning her time in Turkey from 1717, while her husband was ambassador there.
The figure is derived from a print by Henri II Bonnart (1642 - 1711), a discovery recently made by Luisa Mengoni, Curator at the Victoria and Albert Museum. The same series of prints includes a Turkish man that was later used as a model for a smaller Chinese export figure of a ‘boy in Turkish clothing’. However, as well as similarities, there are sufficient differences in both to suggest that later prints copying Bonnart were the actual sources for these figures. Collections of prints of costume, both the latest European fashion and those of foreign people (much less accurate), sold well and the Bonnart prints would have been models for copyists.
Only four other examples of this figure are known: a pair in the Peabody Essex Museum, Salem, Massachusetts, one in the British Museum, London and one in the Victoria and Albert Museum, London, which was exhibited in Beijing in 2012.
The pair in the Peabody and the V&A figure all have the same colouring as this example. The two in London both originated from the Ionides collection but do not make a pair as the BM example has an iron-red skirt and hat and a yellow jacket with polychome medallions and could be slightly later.