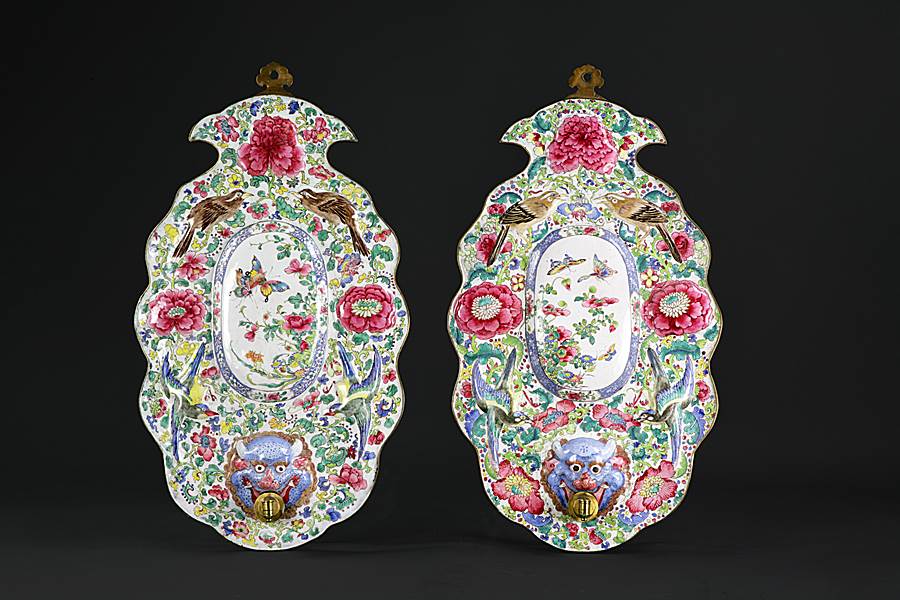 A rare pair of Chinese export painted enamel wall sconces, with repoussé moulding, the central panel with butterflies and flowers, the border with flowers and birds, the brass candle sconces emerging through moulded lion masks.

These exceptionally fine sconces appear to belong to a group of sconces of the same shape but with minor differences in decoration, ordered between 1738 and 1742 for the Danish market. Two orders, one for 16 arrived in Copenhagen in 1740 and and the other for 12 ordered in 1741, both possibly by supercargo Christen Lintrup who was in Canton in 1738 and 1741.
By repute most of them were destroyed in the fire of 1794 - with only four being saved. However more than that are known so it could be that only four weresaved from the first order (possibly for the appartments of Sophie Magdelene of Brandenburg-Kulmbach, the wife of Christian VI) but many of the second order have survived.
The lower birds illustrated here are difficult to identify as they have had the colours changed, but the white cheek patch and general appearance suggest they might be based upon the Silver-eared Mesia (Leiothrix argentauris, Hodgson 1837) or the Chinese Nightingale (Leiothrix lutea, Scopoli 1786) which was a popular cage bird in China.