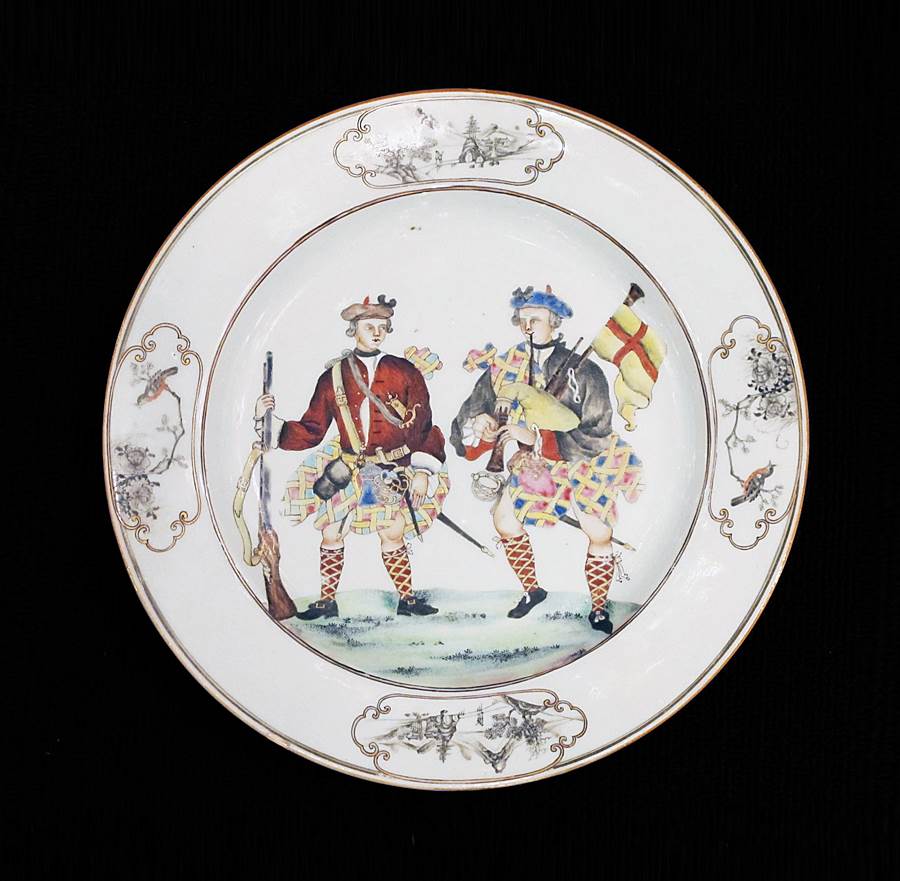 A Chinese export dinner plate decorated in famille rose enamels with two members of the Highland Regiment, one holding a gun and the other playing the bagpipes, the rim with four reserves of birds and landscapes.

This rare plate is one of the most sought after and iconic examples of Chinese export porcelain. The striking central design is derived from two drawings by George Bickham (1706-71). The piper is taken from the frontispiece of A Short History of the Highland Regiment, 1743 and the private from another drawing by Bickham. These and two further images of privates were issued as a set of prints by John Bowles (1701-79) in 1743 and two of these were taken to China to be copied for this plate.
The Regiment, called the 43rd Highlanders (formed in 1739, later renamed the 42nd Foot in 1748 and, later still, incorporated into the Black Watch) was summoned to London in 1743 to be inspected by George II and after rumours that they were to be shipped to the West Indies to fight in the War of the Austrian Succession, many mutinied and returned to Scotland. Three leaders were caught and shot in the Tower and a Piper Donald Macdonnell, was transported as a convict to Georgia. This execution was the reason for Bowles’s prints being published and the piper is believed to be Macdonnell and the private is one of those shot, possibly Private Farquhar Shaw.
So it is believed that this apparent commemoration of two mutineers is an expression of Jacobite sympathy. The enthusiasm was short-lived as the uprising and the cause were defeated at Culloden in April 1746, where the Duke of Cumberland, son of the King, defeated Bonnie Prince Charlie, whose flight afterwards became emblematic of romantic failure.