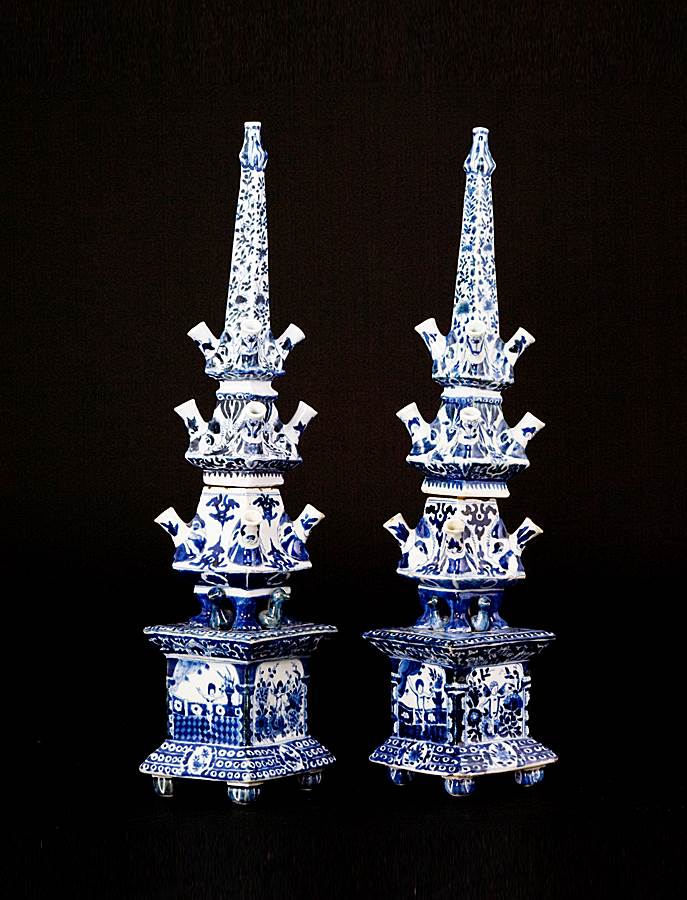 A rare pair of blue and white tulip vases after delft originals, each formed in two parts as a tall pointed spire on a waisted plinth, the spire arranged in three tiers each with four mask shaped flower holders, raised on lion paw feet with birds beneath, the plinth painted with panels of cherubim and putti surrounded by flowers and foliage, on four pad feet.

These are modelled after originals in Dutch delft by Adriaen Kocx (fl. 1686-1701) from the De Grieksche A factory, which specialised in these items, of which a large pair are at Hampton Court, made for King William III and Queen Mary. The obelisk shape is associated with classical antiquity and is also reminiscent of Chinese pagodas, so it combines elements of exotic architectural styles to complement an exotic flower. The delft forms are also derived from Moresque spouted flower holders from the Middle East and the cherubim and masks round the spouts follow Italian maiolica.
Copies in Chinese export porcelain are very rare and, like these are faithfully copied, though the Chinese versions are smaller, and some have even copied the AK mark of Adriaen Kocx on the base. Another pair are known in the collection of Earl Spencer at Althorp House, a silver mounted pair appeared at auction in 1986 and a pair, later over-decorated in green and red enamels, was offered in New York in 2012 .
The tulip has become strongly associated with Holland but it was only in the late sixteenth century that it arrived, probably from Constantinople to Augsburg circa 1550, thence to Holland and arriving in England around 1600. The name tulip derives from a Turkish word for the cloth of turbans, and they quickly became fashionable and highly prized, with many varieties increasing in prices.
The poet Abraham Cowley (1618-1667) described them:
“The tulip next appeared, all over gay
But wanton, full of pride, and full of play.”
They were beautiful, varied, sensual and had a whiff of the harem about them.
The craze advanced, initially driven by connoisseurs and scholars and then by skilled growers (it takes seven years for a tulip seed to become a flower-producing bulb). And then the speculators and traders moved in, seizing upon the bulbs with the recklessness of Wall Street bankers chasing collateralised debt obligations.
By the early 1630s a madness had gripped the Dutch people and in 1634 one bulb of the Viceroy type sold for 2500 florins (a fat sheep cost 10 florins).
In 1635 a sailor visited a silk merchant to deliver important news. He was rewarded with a parcel of red herring for his breakfast. Before leaving, and being partial to onions, he took one that he considered out of place on the counter among the silks. The merchant discovered his loss a little later and searched everywhere, eventually locating the sailor at the quay, chewing on the last morsel of his meal. The bulb of Semper Augustus had been worth 3,000 florins, enough to pay an entire ship’s crew for a year.
In another instance an eccentric travelling English botanist cheerfully dissected a curious onion specimen that he found in the conservatory of his wealthy Dutch host. The owner had the man thrown in prison and he was not released until he had paid the full price of his experiment (an Admiral van der Eyck at 4,000 fl).
This peaked in 1636-7 when single tulip bulbs fetched even larger prices, some selling for the price of a house. The spot market, selling of actual bulbs, was limited to the summer when bulbs could be taken out of the ground, so a futures market developed with contracts for bulb delivery bought and sold; short selling complicated the market and was banned in 1636. On Feb 3rd 1637 the price peaked, then the bubble burst and by April prices had dropped to 5% of two months before; many were ruined.