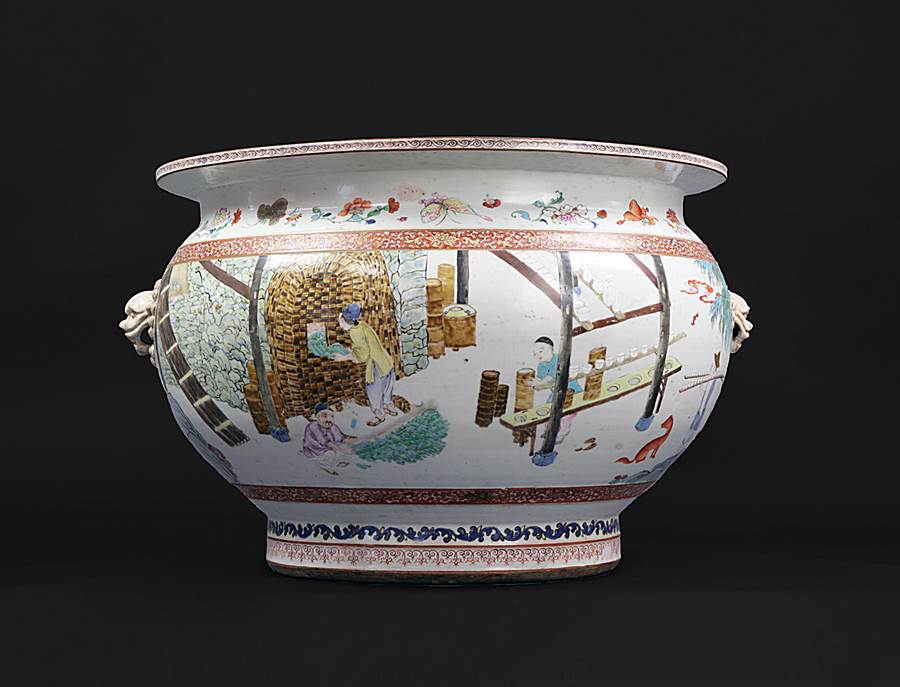 A massive and extremely rare porcelain fishtank finely painted in famille rose enamels with scenes of the making of porcelain on the exterior, the interior with fish.

This fish tank is of the rarest decoration in Chinese export porcelain - only one other example is known in the Gemeente Museum in The Hague, described by Dr Christiaan Jörg as “one of the most interesting and important examples of Chinese porcelain in The Netherlands”.
This large form of container was intended to keep fish, usually for a short period only, and the interior of this example is painted with pondweeds and fish. However the scenes showing the manufacture of porcelain at Jingdezhen make this example very special indeed.
Early depictions of porcelain manufacture are very rare and this is one of the earliest known, those that have survived on paper being of a later date.
These illustrations possibly correlate with the famous set of twenty described by Tang Ying the director of imperial porcelain manufacture in Jingdezhen in 1743. He had been summoned to Beijing and given the twenty watercolours and asked to provide text for them and put them in the correct order. They were described as painted by the order of the Emperor but it is not sure whether it was Kangxi or Yongzheng. However in 1696 Kangxi had two other series of illustrations published showing rice-cultivation and silk-weaving - so they may have been from around this time. After Tang Ying’s work the pictures were returned to the Imperial Library and have not been found since, although his descriptions have survived.
Robert Tichane (1983) has attempted to find the earliest illustrations that match each of the twenty, mainly using woodcuts from an 1815 edition of the Tao-lu, suggesting that they may have been copied from them.
The illustrations on this tank are different from most of the woodcuts, which usually show more of the buildings and with a view from outside and from afar. Here the atmosphere seems closer to personal experience for the craftsmen - the feel is of an interior as if one is inside the buildings, with simple wooden pillars dividing the composition.
In these workspaces two features are notable: the buckets of water next to some of the potters and several sticks laid next to them, within reach. A review of many to the later sets of woodcuts of porcelain manufacture do not usually include these two practical features but in Tichane’s book on Jingdezhen various photographs of potters workshops (mid 20th century) do include them. This suggests that the Chinese painters were painting what they knew rather than an outside artist producing a more constructed schematic of the processes.
Interestingly in the Ming period a special type of kiln (kang yao) was reserved for firing the large fish-bowls and Tang Ying notes that the last of these fell down in the reign of Qianlong and was not rebuilt.