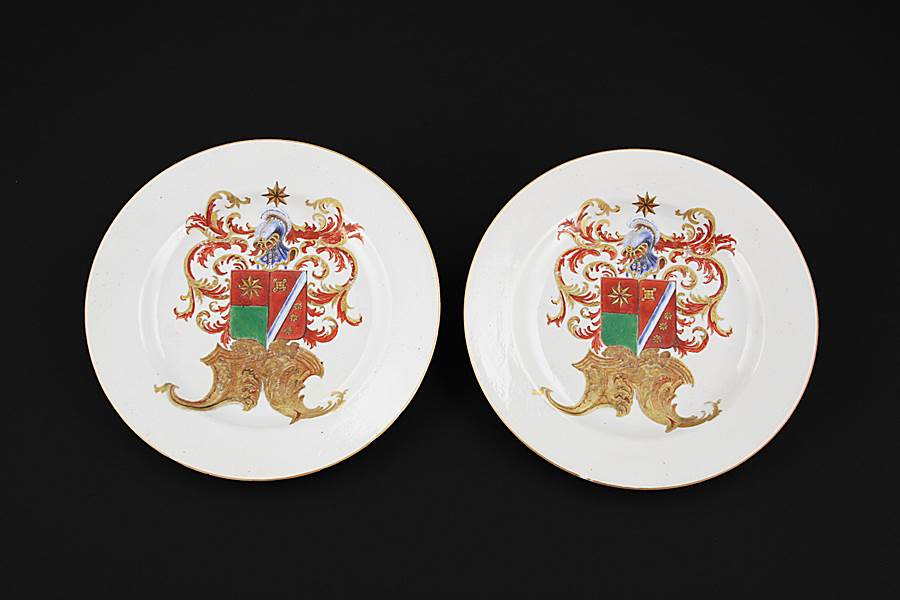 REF No. 5206
Pair of Chinese export porcelain armorial plates with the arms of de Heere

A fine pair of Chinese export large plates boldly painted with the arms of de Heere of Dordrecht above a gilt foliate scroll bracket.


The dating and identification of this well known service has been the subject of change over the years as academic research has progressed. In 1865 the arms were wrongly attributed to Nijssen.

The service was originally dated to 1740 - and the arms attributed to de Heere van deer Holy. However Kroes in his 2007 book on Dutch Market Armorial porcelain says that this was erroneously connected to someone else from the early nineteenth century.

In fact this pair of plates are from a large service that was ordered from China by Huijbert Johan de Heere (1731-1777), in the early 1760s. This date is established from the styles of tureens and other shapes in the service which date from this time.

The use of an armorial with no other decoration is rare for Chinese export porcelain but is striking and this is one of the services that is most desired by collectors and connoisseurs of Chinese armorial Porcelain. Its popularity is reflected in the modern copies from China (which are of inferior quality to the originals and easily told apart).

The dexter arms (gold star on red over green) are de Heere of Middleburg, Goes and Dordrecht. The sinister arms are unidentified though these two arms are recorded accollee in 1704 for a Jan de Heere of Middleburg (wife unrecorded). A seal of 1735 bears these impaled arms for a Johan de Heere (died before 1749) probably Jan's son and the father of Huijbert.

Huijbert was in the Dutch East India Company (VOC) and was in Asia from 1749 to 1763 when he returned to Goes with his wife and children on the East Indiaman Niewland, very likely bringing this service with him.