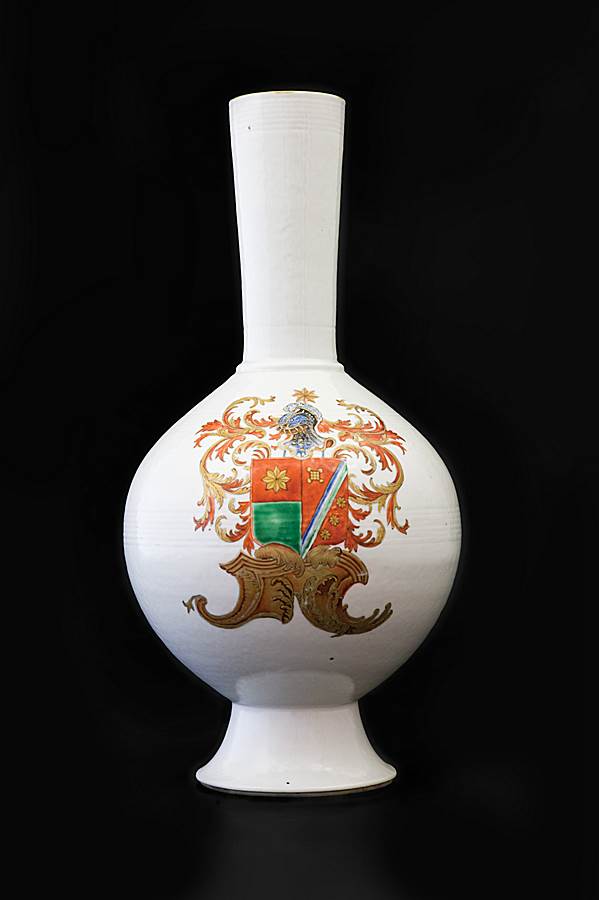 A large Chinese export porcelain bottle vase with a large coat of arms, the waist, shoulder and neck with incised rings.

This is a very unusual shape with no other example in Chinese export porcelain recorded. The form is probably not of Chinese origin and most likely follows a Dutch 17th century metal or glass vessel. The three groups of rings at the waist, shoulder and neck are very suggestive of decorative bands on brass vessels. The service is known to have included a range of rare shapes, including three covered tankards and an elongated teapot.
The dramatic design with the complete absence of any enamelled border or other embellishment, is very rare in Chinese Armorial Porcelain. The style is reminiscent of some early Dutch delft armorial pieces and is probably inspired by them.
The lack of other decoration also makes the dating of this service difficult. A dinner service and tea service are both known, the shapes of the tureens of the former suggest a date about 1760 but the teapot from the latter is of an earlier form.
In 1865 the arms on this service were wrongly attributed to the Nijssem family and then by the early 20th century they were called ‘de Heere der Holy’, as these arms were carried in the early 19th Century by Pieter Jansz. de Heere van Holy (1768-1815) who acquired the manor of Vlaardingen in 1802. He was distantly related to the de Heere family but is too late to have ordered this service.
The arms are of de Heere of Middelburg, Goes and Dordrecht an old family of this region. One early ancester was the 16th century painter Lucas de Heere (1534-84) who worked in England and possibly trained Marcus de Gheerhaerts the Younger and Robert Peake the Elder. Another was Gerrit de Heere who was Governor of Ceylon for the VOC in 1697, with other relatives who were involved in the VOC in the Far East and in South Africa in the early 18th century.

These arms are first recorded accollée for Jan de Heere and his unidentified wife in 1704. They are first recorded in this impaled form on a seal in Middleburg in 1735 by Johan de Heere, probably the son of Jan. He was married circa 1730 to Maria Eversdijk and died before 1749 leaving a son Huijbert and a daughter Susanna.
Huijbert Johan de Heere (1731-1777) is almost certainly the man who ordered this service. He left Holland in 1749, as a junior merchant for the VOC in the East Indiaman Gustaaf Willem, arriving in Batavia. By 1751 he was a supercargo of Mocha and resident of Gamron, Persia. In 1752 he moved to Bantam, Java, and then from 1754 to 1763 he was in Palembang, Sumatra where in 1758 he married Jacoba Frederica Nemegheer (1733-1798). He returned to Goes, Holland, in 1763 with three young sons Jan, Pieter and Willem on the East Indiaman Nieuwland, probably bringing these porcelains with him.