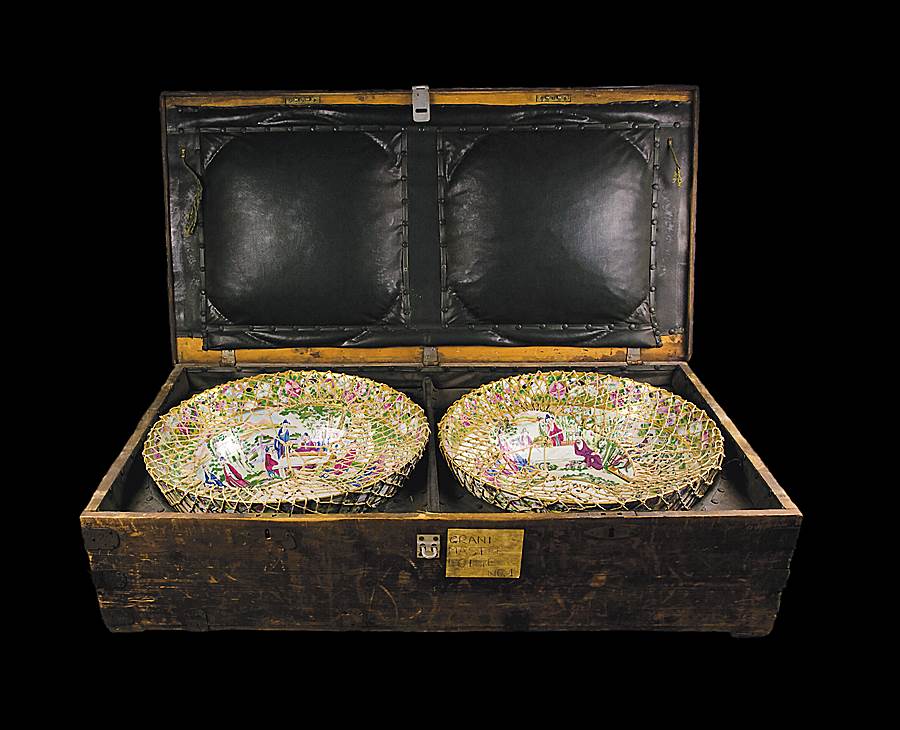 Daoguang period circa 1823-7
English Market
Diameter of each bowl: 22 inches; 56cm
Provenance: from the Grand Master's Lodge since 1827, acquired by Bro. Robert Edwards in Canton.

A pair of Chinese porcelain massive punchbowls decorated in the rose mandarin palette with scenes of scholars and sages, with other Chinese literary and philosophical scenes, the interior of each decorated with a medallion enclosing the Masonic arms of ‘Grand Masters Lodge No. 1’, this device repeated in panels on the sides; in original wood shipping crate.

These large bowls are most unusual. The colour scheme is typical of the period and the execution is of the highest quality for this time. They are decorated with a complex scheme of Chinese scenes, as yet not fully identified but possibly specially commissioned to fit with Masonic ideas of the universality of their craft. Some of the calligraphy on the bowls is from Preface to the Poems Composed in the Orchid Pavilion, by the famous Jin Dynasty Sage of Calligraphy, Wang Xizhi (303-361), that was very popular in the Tang Dynasty.
According to Williams & Davis 1957, they were acquired in Canton by Bro. Robert Edwards for the Grand Master’s Lodge, where they were recorded from 1827 until recently.
The original crate is a remarkable and very rare survival. The wood is English spruce and the construction simple, probably the work of ship’s carpenters reusing materials on board. Robert Edwards could well have had this made specifically for these bowls and, when back in London, the bowls were kept in it between use at Masonic events; it bears the marks of successive maintenance and appears to have been relined later in the 19th century, in cloth similar to the oiled canvas used on ships, possibly recreating what had been there before. The crates resemble the remains of crates from the Diana cargo, a China trade wreck sunk 1817, (Alistair Gibson, pers. comm.)
The carry-nets look to be original too, though nothing similar has survived for comparison. Prints of life on board ship from this date show such string bags used as hanging containers for sailors’ possessions.
Freemasonry is said to have its origins in the builders of Solomon’s temple, although in their present form they emerged in the 18th century. Some masons were involved in large trading companies and the merchant navy, particularly in the East India Companies. In 1813, the Lodges of England were combined together into two Grand Lodges, with Prince Augustus Frederick, Duke of Sussex, (a son of King George III) becoming Grand Master of the Premier Grand Lodge (No 1) (1813-43) and his brother Prince Edward Augustus, Duke of Kent as Grand Master of the Antient [sic] Grand Lodge.
Augustus Frederick had theories that Freemasonry was pre-Christian and could serve the cause of humanity as a universal religion. These bowls would have fitted very well with his thinking and their order may well have been instigated by him.

Robert Edwards
Robert Edwards was an English entrepreneur in the East India Company, in Canton from at least 1823 when he leased the site of the Imperial Hong from Charles Magniac (an Englishman of Huguenot origins also resident in Canton). It appears that Edwards and Charles Markwick ran a hotel here together. Later Edwards ran a hotel in the American Hong.
Edwards was in China (Canton or Macau) until at least 1837. His business with Markwick ceased in July 1837: “Notice, 1st July 1837 – Mr John Smith has joined Charles Markwick to trade as commission agents, warehouse keepers and auctioneers under the style Markwick & Smith at 3 Imperial Hong. The previous business of Markwick, Edwards & Co is closed.”
His activities appear in local newspapers. He wrote a letter, 31 Jan 1837, defending against criticism of his postal service on the Pearl River:
“ I do not distinguish or select letters. Nothing is intentionally delayed. Your criticism of my postal service was severe. Please publish this correction. Sgd Robert Edwards.”
It was also announced on 18 April 1837: “Robert Edwards of 3 Imperial Hong has sold his auctioneering and warehousing business to Charles Markwick w.e.f. 1st April 1837.” He continued as an auctioneer and on 25 April 1837 he announced: “Auction at Sir George B Robinson’s house near Penha Hill on Saturday 29th April of the contents of A P Boyd’s house on his departure from China. Signed Robert Edwards, auctioneer”
In 10th October 1837 was published: “Letter to the Editor – I am the owner of the ferries Sylph, St George and Union. I established ferry boat services in China in 1826. My boats are not involved in smuggling. Everyone knows which two boats are used for smuggling, even How Qua knows, and they are not mine. My boats go up and down to Canton. They do not stop at Whampoa. Sgd Robert Edwards, 3rd October. (Editor – the original advertisement of ferry services in 1836 just said application was to be made to 1 British Hong for passages. It did not identify the owners of the other ferries Rose, Bombay or Jane as different. We will take Mr Edwards at his word.)”
In fact Edwards did not originate ferry services. The first passage boat, the Sylph, was built by Alexander Robertson in 1824 for the use of himself and his friends, notwithstanding opposition from the Canton government.


References: Jean McClure Mudge, Chinese Export Porcelain in North America, New York, 1986, pl. 373, a punchbowl of similar size decorated with Chinese figures in pavilion settings and a plaque containing details of the commission; E.M.P. Williams and Bernard Davis, A Revised History of the Lodge and List of Members 1756 to 1957, London, 1957, pp 78-79, details of provenance for these bowls; Jardine Matheson Archive, Manuscripts/MS JM/F14, No 1, Lease of the Imperial Hong, a lease by Charles Magniac to Robert Edwards, Richard Markwick, William Lane and Aming, the English Company's Compradore, of a factory or houses to be rebuilt at Magniac's expense on the ground formerly occupied by Factories Nos 2, 3 and 4 of the Imperial Hong, Canton, for a period of ten years from the completion of the building(s), 6 February 1823.