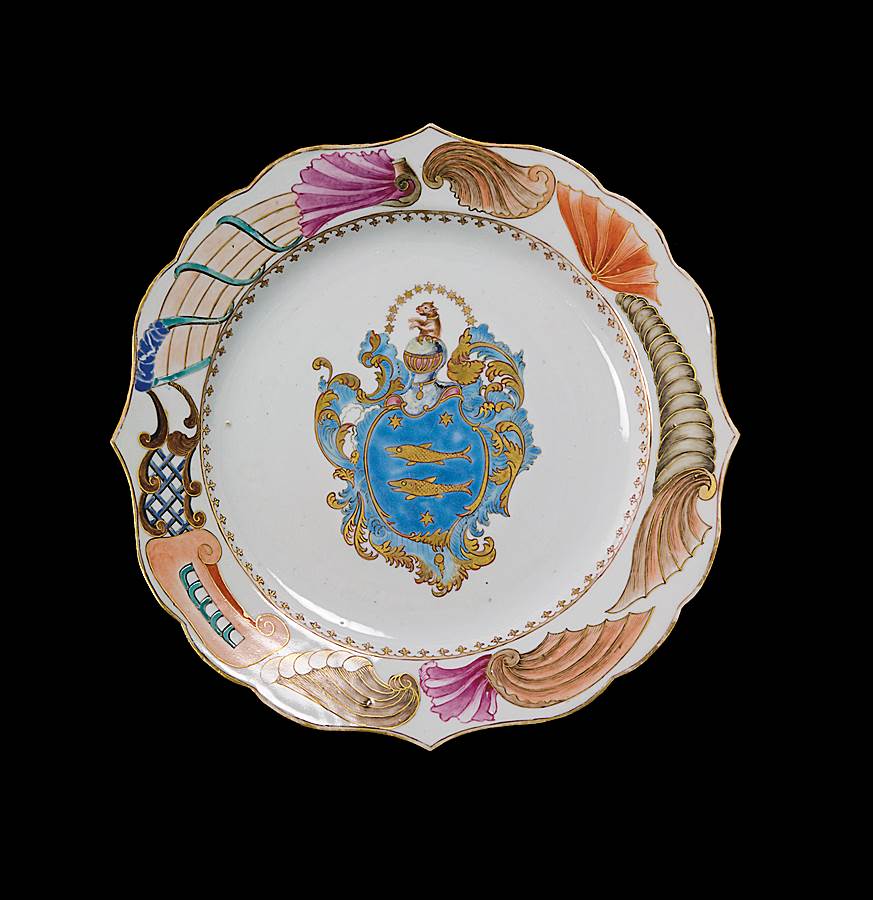 A rare armorial dinner plate with a central coat of arms and the rim with an elaborate design of shell-scrolls.

These arms were formerly attributed to the Snoeck family of Amsterdam but Jochem Kroes has attributed them to Elias Guillot (1695-1743) who was governor of the Coromandel Coast 1733-7 and died in Batavia.

The Guillot family were originally from Bordeaux, where Elias was born. They moved to Amsterdam and several members of the family became wealthy merchants. Elias went to the Indies in 1714 as a junior merchant and master of the warehouse in Masulipatnam in 1715. He moved through the Coromandel Coast and by 1730 was senior merchant, promoted to Governor in 1733. In 1737 he moved to Batavia where he probably ordered this service from Canton. He died unmarried in Batvia in 1743 and left his estate to various relations in London and Amsterdam.

The border is striking and also known on blue and white plates with scenes of tea processing. Howard & Ayers 1978 suggest that the border may have been commissioned specifically for the tea processing plates and then used for this service too. As a merchant Guillot would have handled tea, so it is possible that he also ordered the tea processing series. The Pignatelli armorial service has a similar border and Le Corbeiller 1974 suggests the influence of Rouen faience.

References: Kroes 2007, p324, No 242 with illustrations also of the Japanese plate and a Samson copy; Howard and Ayers 1978 p396, No 393 an example of this plate and also a later Japanese dish with the same arms; Le Corbeiller (1974) p103 two tea processing plates; Phillips 1956, p71 Plate 5 a plate from the Helena Woolworth McCann collection, arms attributed to Snoeck; Crosby Forbes (1982) a dinner plate with the same border and a central scene of two cockerels, peonies and rocks; Sargent 2012, p249, No 124, plate with roosters and the same border as this; Howard 1994, p85, a plate from the Pignatelli armorial service which has a similar border to this one.