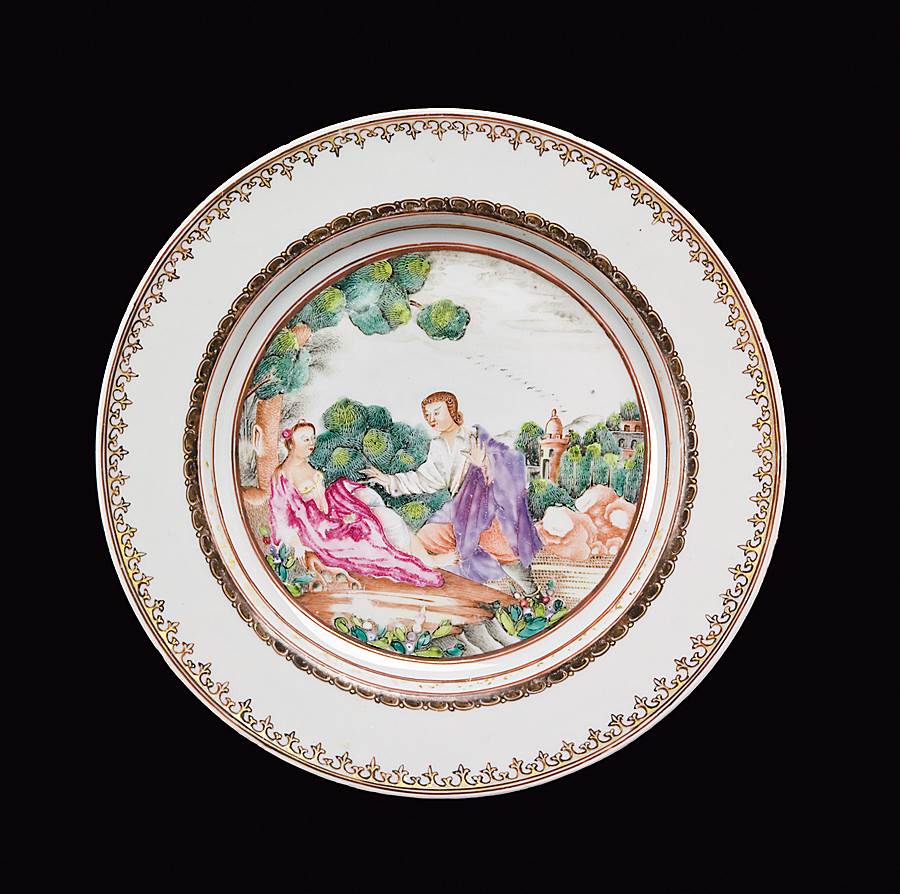 The scene is an illustration taken from an engraving by Nicolas de Larmessin IV (1684-1755) after a painting by Nicolas Vleughels illustrating Le Villageois Qui Cherche Son Veau from Jean de la Fontaine’s Contes et Nouvelles. The young boy wanders the woods looking for his missing calf and climbs a tree for a better view. Meanwhile a couple arrive to sit beneath the tree and the young man declares loudly that he is graced with such a vision of loveliness that he can now see all that he would ever want to look upon. The boy overhears this and innocently asks that, if the man can see so much, can he also see his missing calf.

Around 1730, a collection of engraved illustrations for Fontaine’s Contes using paintings by a number of artists including Boucher, Le Mesle, Vleughels, Pater, Eisen, Lorrain and Lancret were published. Known as Le Suite de Larmessin after the principal engraver, these prints were initially sold as a print collection and then published in book form along with Fontaine’s text. Six of the prints from the Suite are reproduced on Chinese export porcelain, including this one, which is known in two versions. The earliest is only recorded en grisaille and follows the original print very closely, including a boy in a tree watching the amorous couple. The second version, seen here, omits the boy and is only found in polychrome. The other five are: Les Oies de Frère Philippe after a painting by Nicolas Lancret; La Servant Justifiée, also after Lancret; Le Cuvier after P. Le Mesle and Le Baiser Rendu and Le Baiser Donné, both engraved by Pierre Filloeul, after paintings by Jean Baptiste Pater. Most of these are reversed, suggesting that the prints taken to China were smaller re-engraved copies of the Larmessin prints, which were quite large.