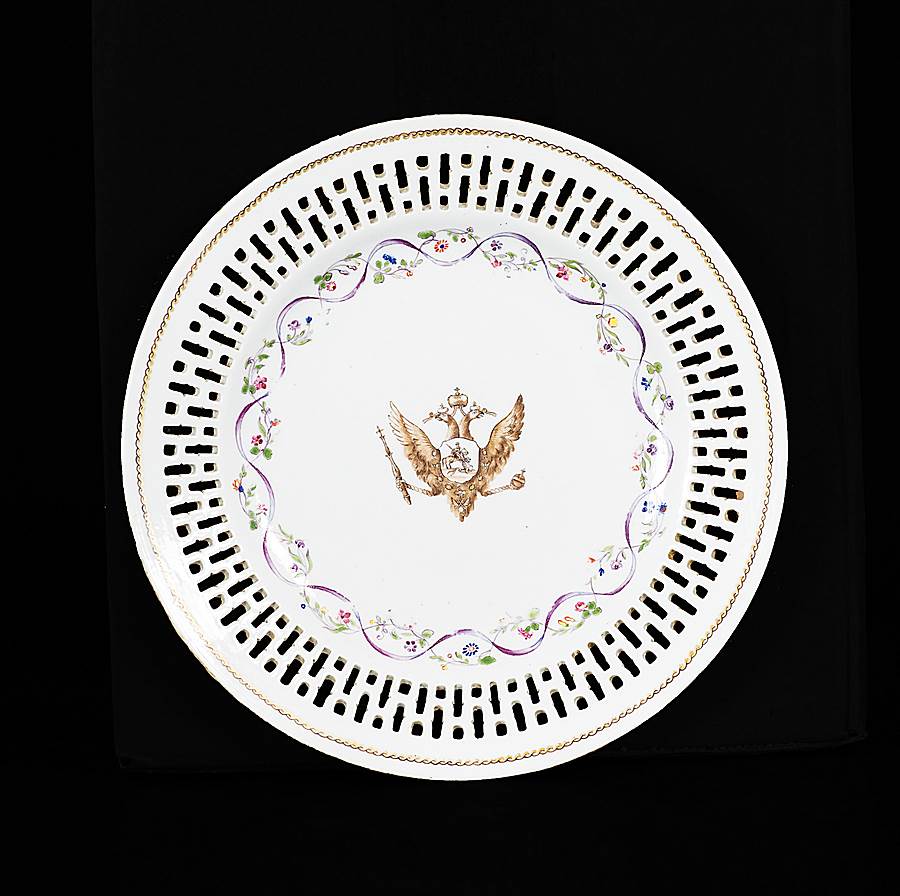 A Chinese export porcelain armorial small fruit plate with reticulated border, decorated in famille rose with the central arms of Russia, and a border of ribbon and flowers.

This is the second of three services known with the arms of Russia, one from about 1750-70 (dating uncertain) and a third one that is early 19th century. This one was ordered for Catherine the Great, who also collected many porcelain services from European factories.  She ordered two services from Wedgwood, the 'Husk' service in 1770 and the 'Frog' service (some stylistic similarities to this one) for her Palace of Grenouillère at Tsarsköe Selo, St Petersburg, in 1773 which suggests that this Chinese service was probably ordered through the English East India Company as Russia had very limited direct trade with China at this date.

The central image is the Arms of Russia which has a double headed eagle on whose breast is the arms of Moscow, a red shield with St George slaying the dragon. Around this is a collar for the Order of St Andrew, the highest order of chivalry in Russia.

Catherine the Great is one of the most interesting and dominant figures of the eighteenth century. She was born Sophia Augusta Fredericka of Anhalt-Zerbst, 1729, in Stettin (now in Poland) and was the daughter of Prince Christian Augustus of Anhalt-Zerbst and Princess Johanna Holstein-Gottorp. Johanna's brother Karl August had been betrothed to Elizabeth Petrovna, daughter of Peter the Great of Russia, but he had died of smallpox just before the wedding. In 1741 Elizabeth Petrovna seized the Russian throne and declared her nephew Peter Ulrich Holstein-Gottorp (1728-1762) as her heir. She invited the young Sophia to marry Peter (who was her second cousin) in 1744. Sophia was required to convert from Lutheranism to the Russian Orthodox Church and took the new name Catherine. Peter was very immature physically and mentally and the marriage was not consummated for some while though eventually a son Paul was born in 1754. Peter succeeded as Tsar Peter III in January 1762 but was removed in a coup in July that year, with Catherine's backing, and he was then killed in a supposedly drunken brawl. Catherine immediately took control and reigned as Catherine II for the next thirty four years always conscious of establishing the legitimacy of her rule, one reason for ordering the services with the Arms of Russia. Catherine is famous for her voracious appetite for handsome and intelligent young men and she had many lovers who were well rewarded even after they had been replaced in the royal bedchamber. They included: Gregory Potemkin, highly intelligent and an advisor for many years who selected most of her lovers; Gregory Orlov, who fathered a child with her, (Alexei Bobrinsky), and whose brother Alexis Orlov was instrumental in the killing of Peter III; Ivan Rimsky-Korsakov ancestor of the composer, and lastly Plato Zubov, some forty years her junior. Such activity in a male monarch of the period would have been simply regarded as virility. One lover Stanislaw Poniatowski, by whom she had a daughter, Anna, she made King of Poland in 1764. Other more lurid tales of her appetites have no basis in fact and were most likely spread by her anti-monarchist enemies in France after she died.

She was succeeded by her son Tsar Paul I, who she detested and who she hinted was not fathered by Peter III but rather by her first lover Serge Saltuikov. She added almost 200,000 square miles to Russia during her reign, including the Ukraine and the Crimea (1783) and waged successful campaigns against the Ottoman Empire and her cousin Gustav III of Sweden. She aimed to rule as an enlightened despot and she read widely and corresponded with the main figures of the French enlightenment (at the Russian Court French was the main language spoken) including Voltaire, Diderot and D'Alembert, though she strongly opposed the French revolution and declared six weeks of mourning in Russia after the execution of Marie-Antoinette.

Upon her accession in 1762 she published a manifesto inviting foreigners to move to Russia, even offering to help pay with relocation costs. She encouraged the studies of economics and science, she wrote a manual for the education of children based on the ideas of John Locke and the Hermitage was founded with her personal collection of art and other objects. Voltaire called her the Semiramis of Russia, after the Babylonian Queen. She died from a stroke at the age of 67 in November 1796, the same year that the elderly Chinese Emperor Qianlong abdicated in favour of his son Jiaqing.