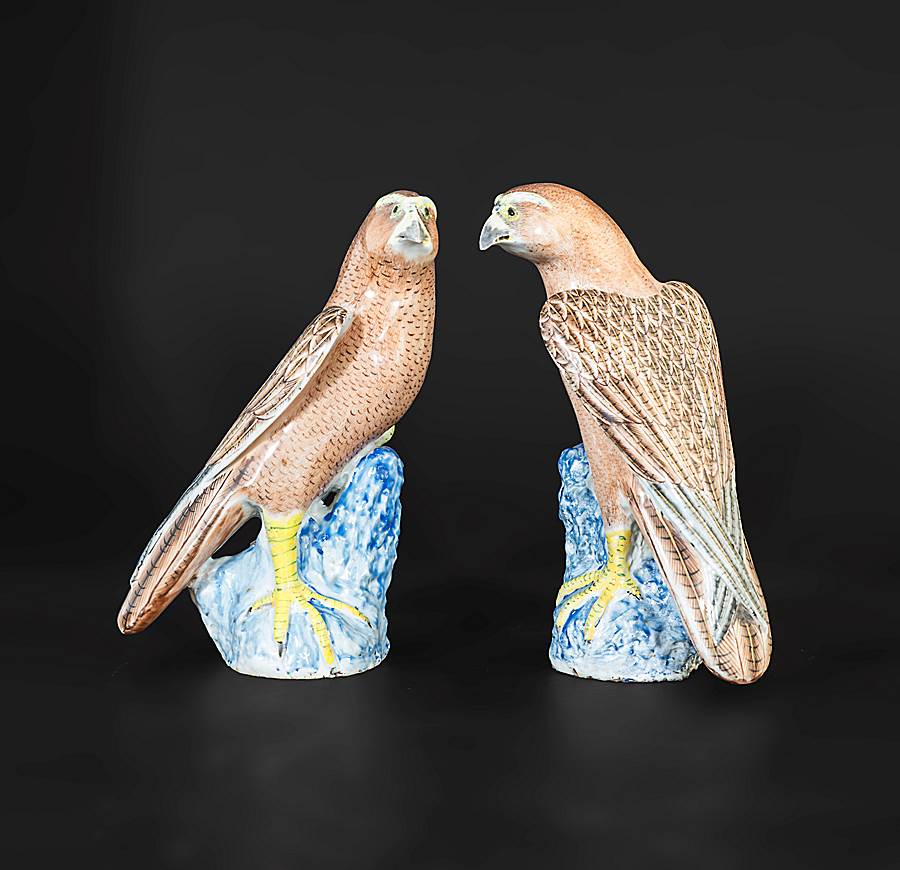 A fine pair of hawks modelled affronté seated on rocks, finely enamelled in sepia and gold with green irises, gold beaks, and yellow legs, the pierced rockwork enamelled in blue and pink.

These are very finely modelled with an intelligent, piercing stare and with detailed painting to the plumage.

Hawks were very popular in China. Small hawks were widely used for hunting winged game, especially wildfowl. Marco Polo relates that Qubilai travelled with ‘quite five hundred’ trained birds of prey and that they had special feeding stations for these animals when travelling (haiqing zhan). Less convincingly, Sir John Mandeville, a fourteenth-century 'English traveller' (his account is semi-fictional but written using contemporary sources), wrote that the Great Qan of China had 150,000 falconers. The most prized species were the 'east-of-the-sea greys' (haidong qing) , the gyrfalcon (Falco rusticolus), which had populations on the North Atlantic coast and the Pacific, both of which were sources of birds for the Chinese court. The Ming Yongle emperor (r.1503–1525) presented seven hawks to Shah Rukh of Persia, declaring in 1519 that the hawks were all flown by his own hand and were not native to China, having been brought as tribute from the ‘shores of the sea’. The most important were white gyrfalcons, symbolising a ruler's virtue and legitimacy. In his masterpiece of 1724, Guiseppe Castiglione painted one for the Yongzheng emperor, adding pine trees and lingzhi to symbolise longevity.

Larger hawks and eagles were called ying, which is a homophone for 'heroic'. Thus, a hawk on rock is a symbol of heroism standing fast against an iniquitous world.

Hawks' tails were often used in Chinese medicine as a curative charm to be rubbed on children with smallpox.