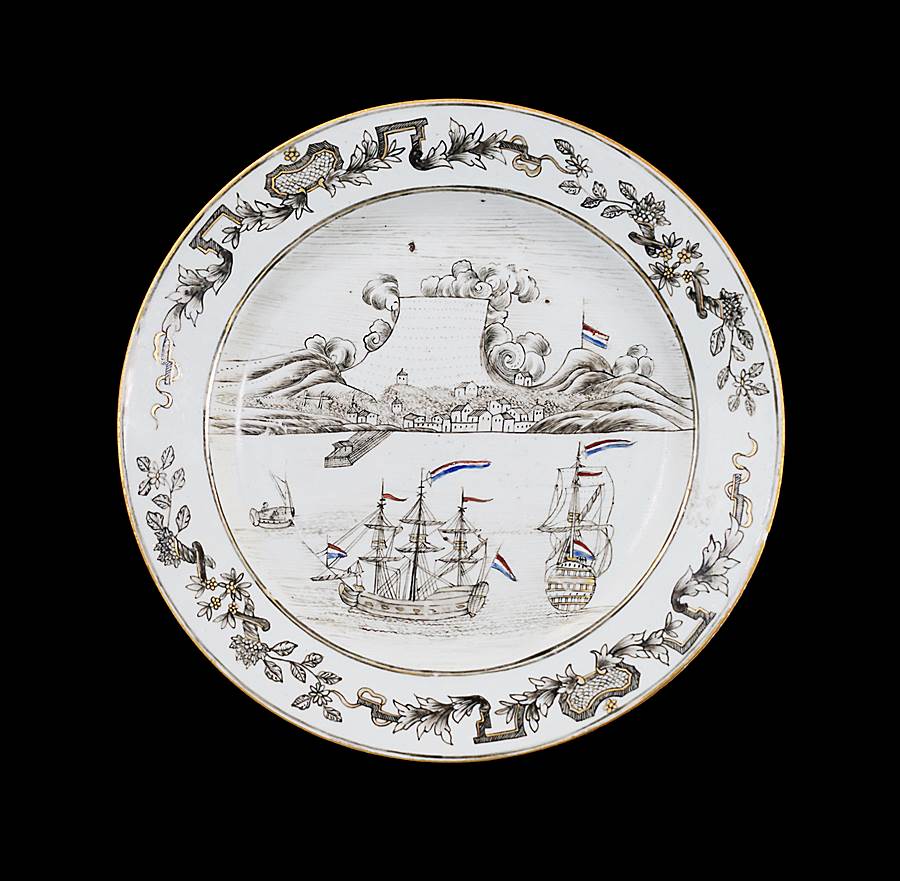 A rare Chinese export porcelain dinner plate with a central scene of ships in a harbour with mountains and a town in the background, painted en grisaille, the flags highlighted in colour, the rim with a simple du Paquier style border.

The central scene shows Table Mountain viewed looking south from the bay, with two ships flying the Dutch flag. There are some features of the settlement: at the back is a church, probably the Groote Kerk (1704) but the other buildings cannot be identified. To the left is the gibbet and the jetty protruding into the bay.
The mountains shown are, from left to right, Devil's Peak, Table Mountain with a flat top and Lion's Head flying the Dutch Flag. Table Mountain was named in 1503 by Antonio de Saldanha, who was the first European to climb it. The earliest pictures are from 1660 by Jan de Vingboon but the settlement was small until it grew in the 1670s and further, with an influx of Huguenot refugees, in 1686. In 1714-1724 several outposts were built to prevent raids from the Hottentots, one of which can be seen between Lion's head and Table Mountain.
The Cape of Good Hope in South Africa was an important stopping off place for ships travelling from Europe to Canton as it was about half way. In particular the ships of the VOC would try to stop off both ways, as this was a Dutch colony for much of the eighteenth century, but in 1794 the VOC went bankrupt and in 1795 the English seized the Cape in what was known as the Capitulation of Rustemberg.
Plates with this scene are known in several versions from about 1740, mostly in famille rose - this grisaille version is rare. The view was a popular one and reproduced in various publications including The London Magazine of 1754.