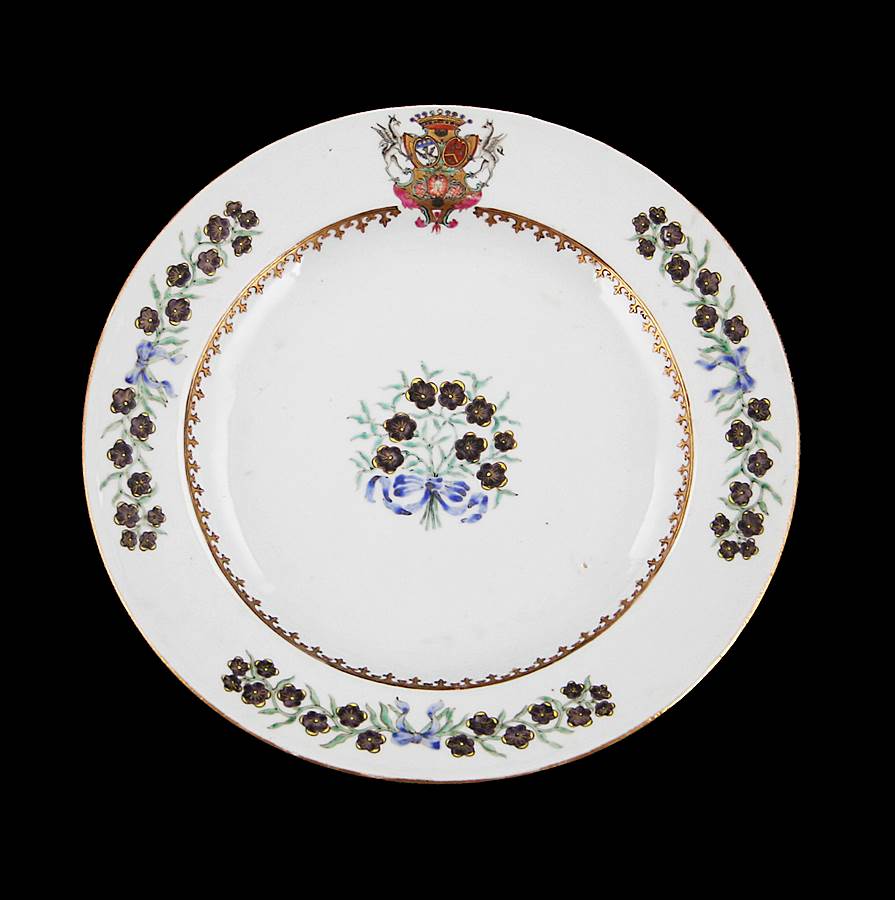 A Chinese export dinner plate decorated at the centre and border with bunches of purple flowers, the border surmounted with the arms of Du Friche and de Beauvillain accollée.

This elegant design is very unusual and is known on no other services.

The du Friche family is from Normandy and Nicolas du Friche (1690-1758), Sieur des Genettes, was a successful lawyer and politician. According to Jougla de Morenas, 1952 (Vol 4, p71 and ref. Nouveau d'Hozier 145) the arms were granted in 1656 in Normandie (corrected from Versailles,  Jougla Vol 7 p265) :
D'argent à un épervier de sable becqué onglé griffé de gue et un chef d'azure chargé de 3 étoiles d'or  (the phrase 'becqué onglé griffé' refers to a resourcefull defensive position).
Several members of this family were significant in the post revolutionary period in France but it has not yet proved possible to find any of them using these arms.
The sinister arms are de Beauvillain, given in Rietstap as from Poitou - (Arm. gén. de 1696):
De gueules au chevron d'or acc de trois étoiles du mesme et surmonté en chef d'un croissant d'argent.
The Beavillain family were based in Poitou and long established, and one was also Seigneur de Vau.
No marriage between the du Friche family and the Beavillain family - as this accollée arms would suggest - has yet been found. The marriage would have been about the time of the order of the armorial service, which is dated circa 1755 from enamels and border type, so the couple therefore would have been born approximately between 1710 and 1725.
One René Beauvillain married Jeanne Menou in 1722 and had at least two daughters Marie and Anne who could have been the bride of a du Friche, possibly a younger brother of Nicolas. Research has shown that he had a nephew or great-nephew, René Dufriche (1762-1837) who became Baron Desgenettes and served as senior medical officer under Napoleon. His parents - as yet unidentified - might have ordered this service. In the biographies his father is given as 'avocat au Parlement de Rouen' - a position also held by Nicolas. However René later had his own arms created, which do include a band of three stars, when he was ennobled.
Nicolas du Friche (1690-1758) was a lawyer for the parliament in Rouen and married in 1741 to Francoise Le Sergent (1709-1770). Two of his sons married sisters of the de Broé family, including Charles Éléanor Dufriche des Genettes de Valazé (1751-1793) who married Ann de Broé in 1777.
Dufriche-Valazé was initially an enthusiastic revolutionary and Mayor of Alençon but he fell foul of Marat who had him arrested with the Girondins in 1793 and tried for treason. Upon conviction he drew a dagger in open court and stabbed himself in the heart rather than die on the guillotine. His companion in the dock Brissot is reported to have seen him shaking and, thinking him afraid, said:
"Eh quoi? Tu trembles?"
"Non, je meurs," replied Valazé who then expired.
He had a son who was a general at Waterloo and in 1966 during renovations at a Hotel in Alençon leaflets were uncovered from 1793 written by Valazé declaring: ‘Je suis arrêté sans savoir pourquoi, sans même avoir de dénonciateur.’