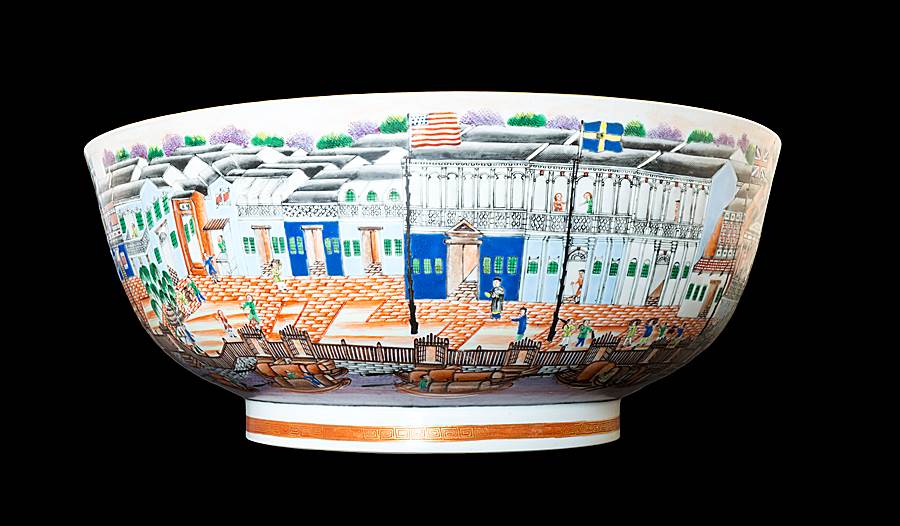 A Chinese export porcelain punchbowl painted to the exterior with scenes of the Hongs at Canton in famille rose enamels, showing the flags of Denmark, the Philippines, France, America, Sweden, Britain and The Netherlands.

This bowl is identical to one now back at Nostell Priory. It was listed there in an inventory in 1806, belonging to Sir Rowland Winn, 6th Baronet, ‘a gay fox hunter’, who inherited Nostell in 1785 at the age of ten. The American flag is shown here next to the Swedish Hong, where the Americans set up business having moved from the building between the English and Dutch  Hongs around 1788.
Also unusual on this bowl is the Philippine flag for The Real Compañia de Filipinas (Royal Philippine Company) that was founded in Madrid in March 1785 under the patronage of Charles III. This flag was first used in 1787.

Related Examples: Sargent 2012, No 241, an identical bowl in the Peabody Essex Museum; another identical example is in Nostell Priory, Yorkshire (see Patricia Ferguson, Canton Revisited: A Hong Bowl at Nostell Priory, Apollo Supplement Historic Houses and Collections, (April 2009) 18-23); two bowls in the Winterthur Museum, No 1961.1427 is similar but has the US flag between the English and Dutch as on the grisaille bowls and No 2005.0037, identical to this example; an identical bowl is in the Reeves collection, Washington and Lee University, gift of HF Lenfest - see Paul A Van Dyke & Maria Kar-wing Mok 2016, Images of the Canton Factories 1760-1822, Reading History in Art.