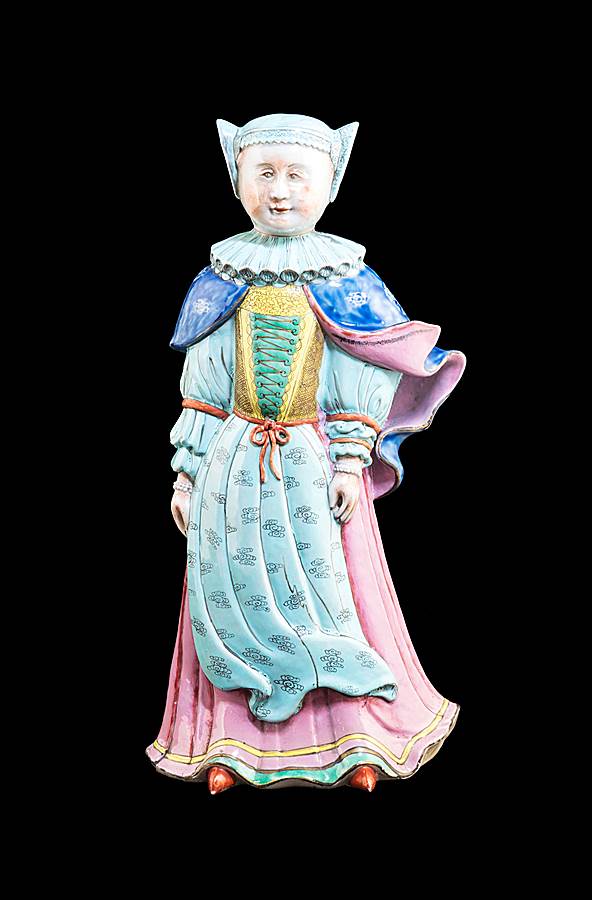 REF No. 6650
Chinese export porcelain figure of a lady in Jewish Dress

An extremely rare Chinese famille rose porcelain figure of a standing woman dressed in the formal clothes of the Frankfurt Jewish community.

This figure is one of only three known different models of this size and decoration, with thick enamelling. The other two are a bearded man holding out his left arm with a purse (a pair to this figure) and a Turkish dancer. All are extremely rare, with five examples of the Turkish girl recorded and about a dozen of the others, more of the women known than men. They were a private order about 1740, but it is not clear for which market they were intended or who might have ordered them. All three derive from European prints but with modifications - suggesting either that the order specified the changes, or that they derive from intermediate prints as yet undiscovered.
This figure and the male companion were long described as a Dutch couple but research by Ronald Fuchs has shown that they are in fact wearing the Jewish costume of 16th century Frankfurt, as illustrated in a print by Caspar Luyken, circa 1703, of  a Jewish couple, plate 39. The male figure is not too close to the man in this print but the costume is from another print, plate 71, by Luyken from the same book, of a Polish Jewish figure, (thought by some to be a portrait of the Ruthenian Jewish scholar Nathan Hannover) though the pose differs.
It is unclear why Jewish figures should have been chosen at this time but it does seem to be deliberate as these two prints, the only ones of Jewish costume, have been selected out of the whole book. Many Sephardic jews were involved in trade with the East, based in Amsterdam and London, and some ordered Chinese Armorial dinner services so might have commissioned such figures. However the dress on these figures is of Ashkenazi Jewish type and they were generally less wealthy than the Sephardis. So it remains a mystery.
The prints come from two series of exotic foreign costume collections and the fashion for such things in the second quarter of the eighteenth century may have prompted the order without any particular distinction. The Turkish dancer is from a print by Henri Bonnart, circa 1702.
A pair of these male figures was in the ship's cabin of Admiral John Byng described as 'Dutch Merchants', from a label on the reverse of the male figure in the Hodroff Collection. So the misidentification is almost contemporary.

Related Figures: Although the body of this figure is made from moulds, many of the smaller details were worked by hand in the potters’ workshop in the finishing stages, as well as the enamelling all being done by hand too. In particular the bow at her waist and the distribution of the cloud motifs painted in grey on the turquoise apron appear to be unique to each example. By examining these in the published examples that we have found, at least 10 different figures can be differentiated. (The author would welcome information about other examples.) 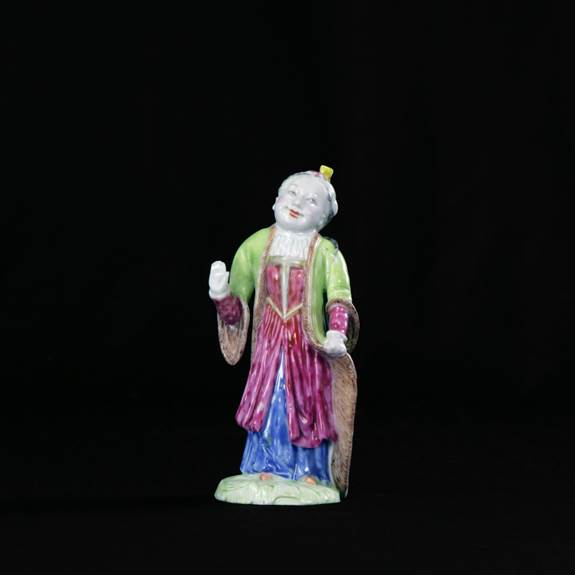