REF No. 6724 GG
GG: Chinese armorial porcelain dinner plate with the Royal arms of the Duke of Gloucester

A Chinese export porcelain armorial octagonal dinner plate with a central coat of arms supported by a lion and a unicorn, the cavetto with a chain border, the rim with flower festoons.

These are the Royal Ducal arms for Prince William Henry, 1st Duke of Gloucester and Edinburgh, Earl of Connaught, KG PC FRS (1743-1805). William was granted use of the arms of the kingdom, differenced by a label argent of five points, the centre bearing a fleur-de-lys azure, the other points each bearing a cross gules.
He was the third son of Frederick, Prince of Wales, son of King George II. His eldest brother became King George III in 1760.
He secretly married Maria Walpole, the Dowager Countess of Waldegrave, an illegitimate granddaughter of Sir Robert Walpole and they had three children none of whom had issue surviving. He had an illegitimate daughter, Louisa Maria, by his mistress Lady  Almeria Carpenter 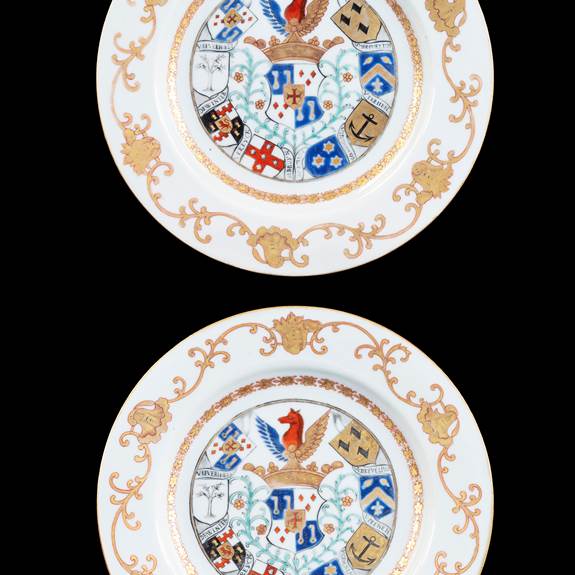