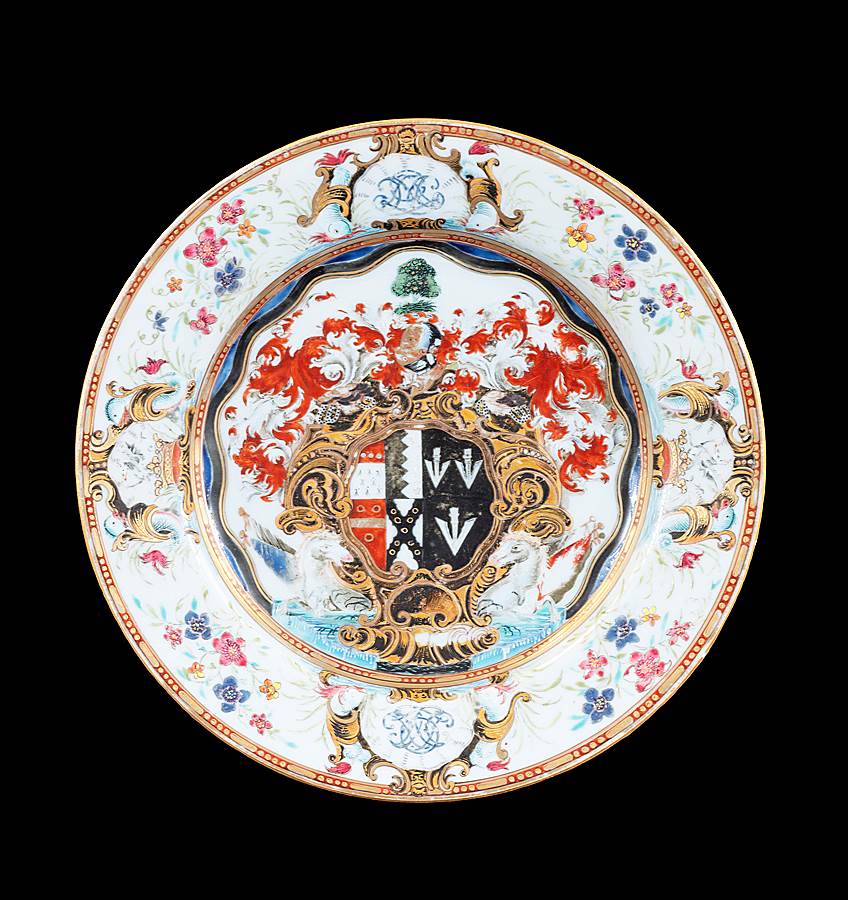 An armorial dinner plate very ornately decorated in rich famille rose enamels in rococo style, the central coat of arms surrounded by elaborate gilt scroll and shell framing and rouge de fer and white mantling, with two horses above a waterfall, all within a scalloped frame, the rim border having sprays of European flowers and four panels with monograms and crests.

This is the most famous of all the Chinese Export Armorial services. The whole design is almost overpowering and has not a trace of Chinese influence. The original artwork is believed to have been painted by Arthur Devis Sr. (1711-87) and still survives.
The arms are for Leake Okeover Esq of Okeover near Ashbourn, Derbyshire. Properly they are, on the dexter half, clockwise from top left: Okeover quartering Byrmingham, Pettus, and Leake impaling, on the sinister half, Nichol. The crest above the arms is an oak tree on a green mound and the rim crest is a dragon on a ducal coronet, while the monogram is LMO.
The service was ordered by Leake Okeover in about 1738 and two deliveries were made: in 1740 (70 plates and 30 dishes) by Ralph Congreve, costing £99 11s 10d; and in 1743 from Joseph Congreve, commander of the ship Prislowe, a further 50 plates and four large dishes. The cost of roughly £1 per piece was very high and much more than usual for armorial services, reflecting the high detail and craftsmanship. In armorial porcelain this service has never been equalled for quality. Only plates and large dishes are known.
Leake Okeover was the son of Thomas Okeover and Catherine Leake and was born in 1702. He married in 1730 Mary, daughter of John Nichol but died without heir in 1765, a year after his wife. He moved to the Tudor House at Okeover after his marriage and in 1747 built an extensive new house there.
His ancestral estates at Okeover, first recorded in the possession of Ormas Acover in 1100, are still in the family having passed through cousins. Much of this service was sold in 1975 by Sir Ian Walker-Okeover Bt.