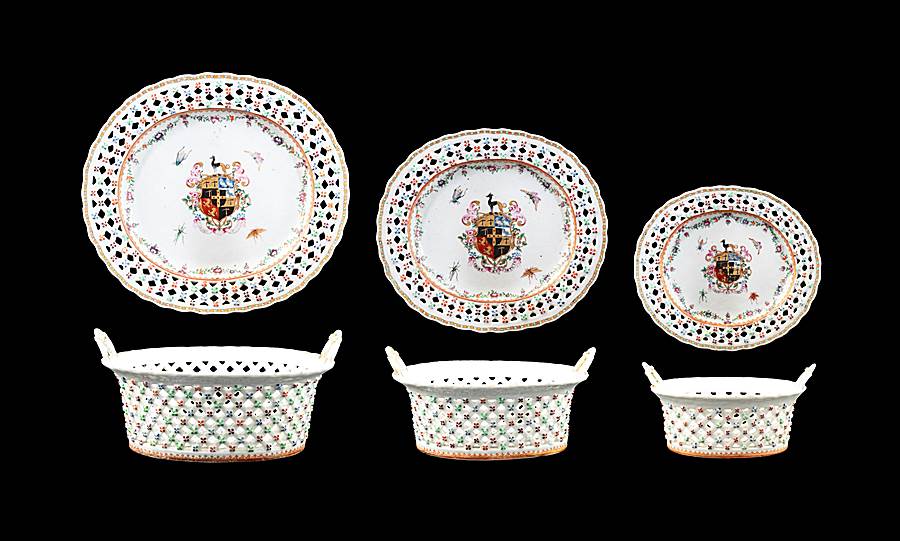 A graduated set of three Chinese export porcelain armorial reticulated fruit baskets and stands, with a central armorial surrounded by four insects and floral swags, the rim with a chain border.

The arms are for Piggott (Per fess ermines and sable three pickaxes counterchanged) quartering Pelling (Per fess azure and argent three pelicans in their piety counterchanged) and Pepper (Gules three demi lions or - and this should also have a chevron argent with three sickles sable) with Paynton (Sable on a cross engrailed or five lozenges gules) in pretence. The motto: Labore et Virtute.
The service was ordered by Francis Pigott who married Anne, daughter of Richard Paynton (d1749) of Banbury House. The ‘in pretence’ arms here denote that Anne was an heiress.
His descent:
1. Francis Pigott (1666-1704) m (1688) Anne Pelling (d1755)
2. John Pigott (1690-1762) m Isabella Gillery (d1754)
3. Francis Pigott (1732-90) m (1770) Anne Dolly Paynton
The Pelling and Paynton heiresses are shown but the other quartering is not certain - the arms are close to Pepper but no marriage with a Pepper has been found. It could be for Gillery. Isabella was the daughter and heiress of Thomas Gillery of Newcastle-upon-Tyne, an officer in the army of King William, who served in Ireland in 1691 as major to the Prince of Hesse's brigade, when the prince lay ill of wounds received at the battle of Aghrim, the command having devolved on Lord Cutts. Thomas was also wounded, and had a horse shot under him. His arms have not been found but could explain the third quartering.
Francis was educated at Eton College, admitted to the Middle Temple in 1754 and married Anne Paynton about 1770, having a son Paynton. His grandson Gillery Pigott (1813-75) was a Liberal MP for Reading.
His grandfather Francis (1666-1704) was a noted composer, organist and an associate of Henry Purcell, who he succeeded as organist at the Chapel Royal, St George’s, Windsor. His anthem I Was Glad was sung at the Coronation of Queen Anne in 1702.

The delightful reticulated forms of thes baskets, with mouldet famille rose flowers, is copying a form originating at Meissen. Such forms are rare in armorial porcelain.

References: Howard 2002, p446 this service and the mention of a bookplate in the Franks Collection (23614)  that has identical quarterings and coat in pretence, although of slightly different style, and is engraved 'Francis Pigott Esq’.