REF No. 6855
Chinese export porcelain garniture with the parrot design attributed to the Pronk Workshop

A Chinese export porcelain fiver piece garniture of three bottle vases and two beakers vases, each painted in famille rose enamels with a parrot on a swing.

This is a fine example of this rare design traditionally attributed to the Pronk workshop, though it is probably not by Carnelis Pronk himself.
The VOC set up a venture in the 1730s to make very high quality porcelains in China to specific designs produced in the West but in the Chinese style. They employed Dutch artist Cornelis Pronk to make designs for these and he produced four sets of drawings over about three and half years that were sent out to Batavia. From there the designs were taken to Canton and manufacture was commissioned by Chinese agents. The designs were elaborate and used bright enamel colouring.

Eventually these proved too expensive and the venture was abandoned in about 1740, though some of the designs were revived in the later 18th century, including the Parasol design for which an original drawing survives - and a ‘flowers and moth’ design recombining details from prints by Marie Sybilla Merian - which had also been used for various other details in the Pronk designs.
What remains today is a rare and fascinating range of porcelains, with distinctive colouring and of a very high quality. Thus they have an appeal to serious collectors of Chinese porcelain.
As the problems had developed with the costs of manufacture it seems likely that the Dutch agents in Batavia tried to simplifiy the designs and to broaden the range of designs. One pattern that was introduced was a Parrot and Spaniel (Fig. 8), taken from a Meissen service of about 1732 using a chinoiserie drawing by Petrus Schenk (Fig. 4). Parrots were a quick short hand for the exoticism of the Far East and also popular as pets and so a few different examples appear on designs in the Pronk workshop at this time.

Several links suggest that this garniture is from the small group made in this distinctive workshop.
These bottle shapes are less common and similar garnitures are found with the Doctor’s Visit, an established Pronk design, both in blue and white and famille rose (Fig. 3).
The colouring of the parrots closely follows that of the Meissen/Schenk design, also found on a Chinese famille rose example (Fig. 5), with white face, blue head, yellow forewings and pink body.
The Schenk drawing has not been found but it is possible that he produced the designs for both of these parrots as they share the same elements: cherries, a chain and a small tray attached to the perch..
A later design known as the ‘spaniel’, rather crudely drawn, has both of these parrots on border panels (Fig. 7) and recycles both of these designs.
One bottle vase is also known with this design on a celadon ground (Fig. 1), which is known on a pair of Archer vases (another Pronk design) but otherwise very rare.
All of which indicates that these designs are all contemporary and interconnected in their creation and with the Pronk workshop production.
In the Shan Hai Jing or Classic of the Mountains and Seas from the period of the western Han (202 BC-220 AD), the yingmu (parrot) is described thus:
‘The parrot is a happy bird...
Inside a cage, happy on its own,
A secluded branch becomes its throne.’ 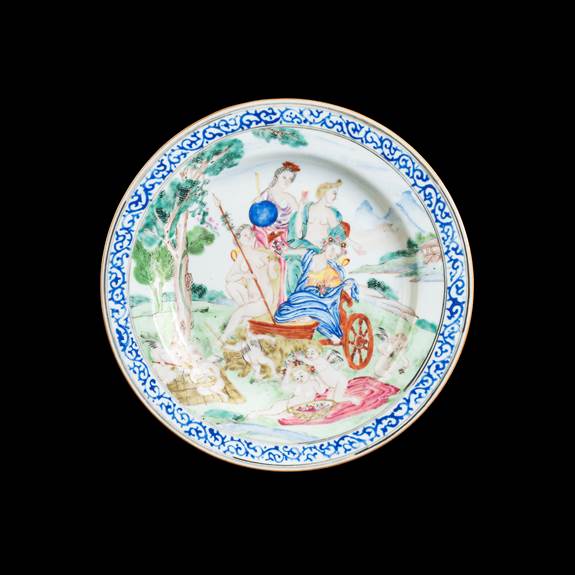