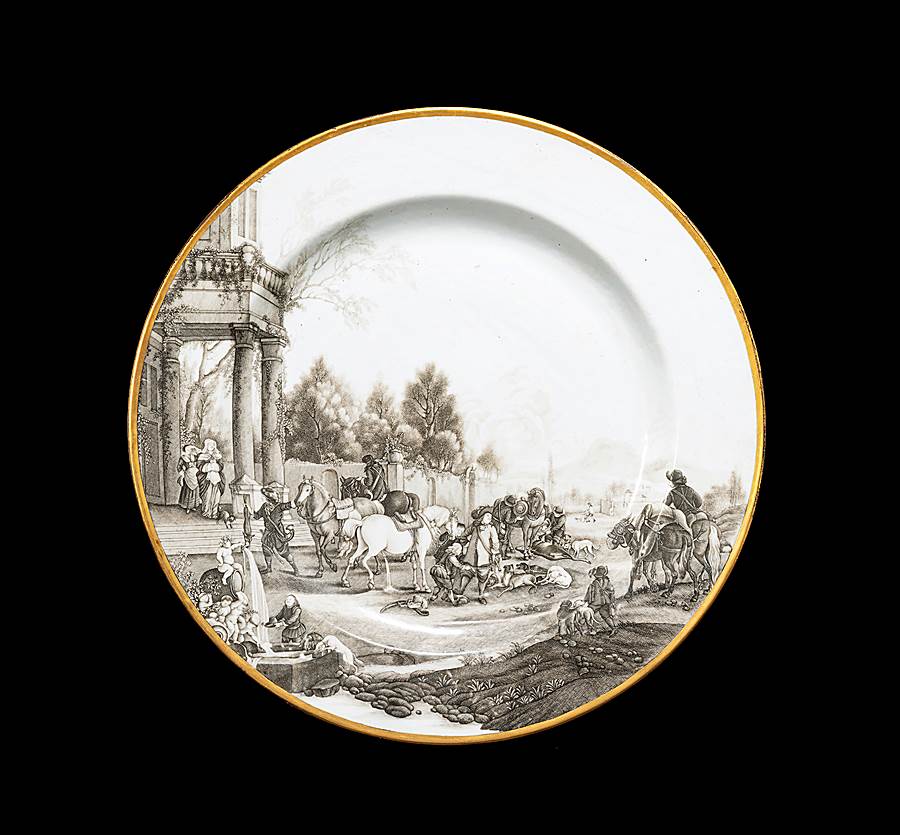 A Chinese porcelain armorial charger with a finely painted grisaille scene after a 1737 print, La Fontaine de Bacchus engraved by Jean Moyreau (1690-1762) after a painting by Philips Wouwerman (1619-1668); the underside with a coat of arms attributed to Robert French of Frenchland in Scotland.

This remarkable and apparently unique charger is an exciting new discovery and joins only five other recorded examples from this series, all with different scenes and of the highest quality.

The print by Jean Moyreau is titled The Fountain of Bacchus but the painting it is after, by Philips Wouwerman, is usually known as The Return from the Hunt. The original painting is now in the Staatliche Kunstsammlunge Dresden and the print is from about 1737-1739 as part of an extensive suite by Moyreau of works by Wouwermans. The grisaille enameling by the Chinese artist is of exceptional quality and the use of the original print is extremely sophisticated, relocating some of the foreground elements to better fit the circular canvas of the porcelain dish.
Only five other such chargers are recorded: two in the British Museum, with a biblical and a mythological scene, and three with flowers after Monnoyer, two in the Metropolitan Museum, New York  and another in the Peabody Essex Museum, Salem, Massachusetts.
All these dishes have different images on them - which would have been very expensive to commission in Canton. This is most unusual for Chinese export porcelains with Western or European Subject designs like this. Normally the whole teaservice or set of plates would have just one image reproduced many times. Some sets of two or four are known but it is very rare by comparison with many European ceramic services which might have many different scenes from a suite of prints.
The order for these dishes and another linked set of bird and animal dishes, all painted in very high quality grisaille, are likely from a single workshop in Canton and the venture to produce such high quality works for export is comparable in some ways to the better known Pronk venture which was underway at the same time.
The coat of arms has been attributed by David Howard (1974) to Robert French of Frenchland and Thornydykes in Scotland but there is no evidence of the order or of other art collecting that might suggest that this man was behind the creation of these spectacular porcelains. In the literature these are therefore linked with Robert French but it should be noted that several other families in Britain and the Low Countries bore very similar arms, some of whom had sufficient wealth to order such a set but there is no evidence linking any of them with this set. Some other porcelains are known with these arms and the style of the mantling here looks more British than Continental.
Little is known about Robert French (1705-1758), the son of David French MP (d.1720) of Frenchland and Thornydykes. David was an MP for New Galloway in the Scottish parliament of 1702 and he had been granted substantial lands in Scotland in 1707. He married three times, with his second wife Elizabeth Thomson (d. 1712) being Robert’s mother. David died with his estates in a poor state and they were eventually sold by his heir Robert in 1730. Robert moved to London and made a considerable fortune in commerce. He married Elizabeth Hull (1709-56), daughter of Christopher Hull of Brampton, and their only daughter Elizabeth (1746- 1813) married John Wallace of Sidcup in Kent. 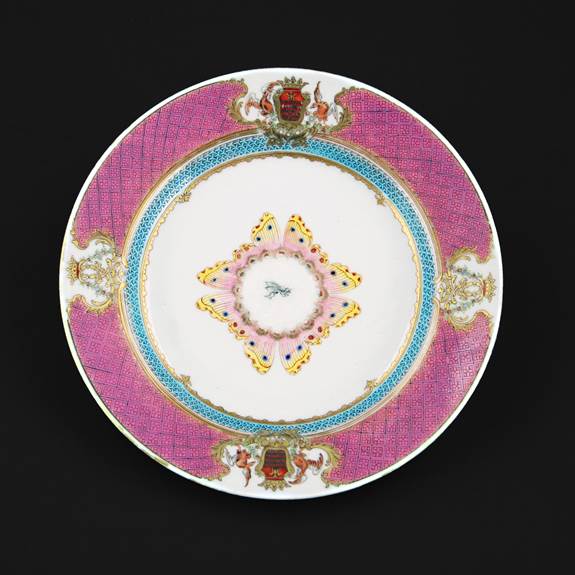 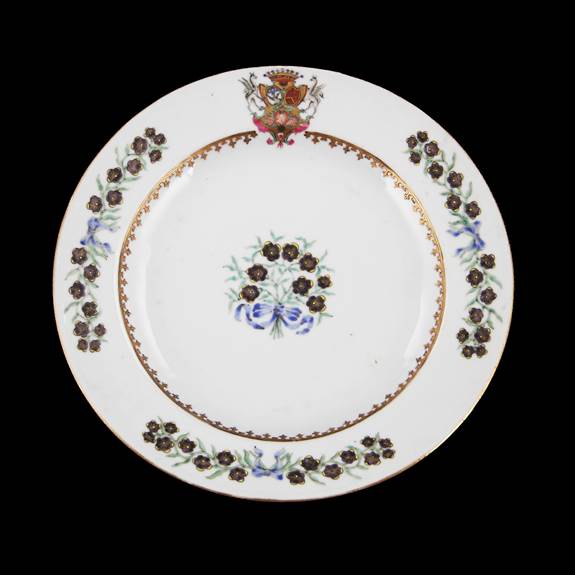